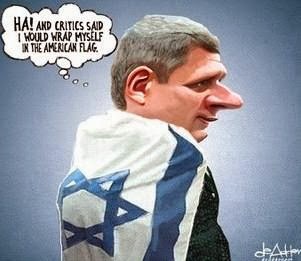 But it’s not Israel that he supports. It’s the government of Benjamin Netanyahu. Among the great truths the Canadian delegation will not be reminded of is that Mr. Netanyahu represents only one faction of Israel today, just as Mr. Harper represents only a minority of Canadians.


Like Mr. Harper, Mr. Netanyahu has generated a great deal of opposition. But Harper will not see that opposition:

Never having seen it for themselves – although it’s the easiest thing in the world to do – Mr. Harper and crew will not see how Israeli soldiers at many West Bank checkpoints casually humiliate and torment Palestinians way beyond any legitimate Israeli security needs. Instead, they will join the Netanyahu chorus and dismiss anyone who makes this point, or criticizes virtually any Israeli government policy regarding the Palestinians, as anti-Semitic. The Holocaust is routinely invoked.

I wonder if any of Mr. Harper’s fellow travellers, including the accompanying journalists, might be interested in branching out a bit for themselves. There is, after all, a veritable cornucopia for them to experience. For just one example, the Israeli group Breaking the Silence, founded by disillusioned Israeli Defense Forces soldiers and veterans, collects testimonies from IDF soldiers who can no longer remain silent about the brutal treatment they’ve witnessed by Israelis of Palestinians. About 900 from all ranks have spoken out. Wouldn’t it be vaguely interesting to talk to them?


The prime minister works very hard to not see what doesn't fit into the way he frames the world. In his world, only the like minded have any legitimacy. He is Ignorance personified. And his ignorance drives his paranoia.

What saddens me is that, among our politicians, it is not only Harper who takes this position. Trudeau, Mulcair, and even Ms. May are all unquestioning supporters of anything Israel does and none of them has a balanced view of the Palestinian question. This has become something of a litmus test for me where politics is concerned and I will be forced to spoil my ballots for the foreseeable future because none of the parties has any sense of justice for the people of Palestine.

It's sad, Kirby, that Gentiles are afraid to argue the Palestinian cause.

It seems that only Jews like Mr. Caplan are willing to look at the other side.

I've been studiously avoiding the media coverage of Harper's visit as much as possible, Owen. However, I did read his comments about what he calls 'the new antisemitism.' His conflation of criticism of the state of Israel with antisemitism is truly beneath contempt, as is so much else about the man.

He is beneath contempt, Lorne, precisely because he has nothing but contempt for those who don't see the world as he does.

Aditionally, the ignorance that he propagates is a false ignorance, and ignorance of will and preference, in fact he is not an ignorant man. He is selfish, narrow and nasty, a toxic personality in a position where there is no room for such behaviour in the face of the challenges we are only sometimes choosing to confront.

The bullies did rule for a time
But they were soon thrown into the outer darkness
And for them there was great weeping and gnashing of teeth.

It would be appropriate, Anon, to throw both regimes into the outer darkness.

But, at least for the moment, they are enjoying centre stage.

Harper as the other dictators are sociopaths. Harper cares about Harper and absolutely nothing else. If Harper didn't have a use for Israel? Harper would drop that country,like a hot potato.

Harper picks those he can control. Harper's list of degenerates, is as long as his arm.

Harper is the only Canadian PM ever, to be held in contempt of Parliament. How that monster Harper gets to stay in office boggles me. None of the opposition does anything about it either.

He stays in office, Anon, because he knows how to game the system. And we have -- so far -- let him get away with it.

Harper's comments were stupid, ignorant, and thuggish, just like his idol, Netanyahu. Many Jewish/Israeli's don't like Netanyahu or some of Israel's policies. Netanyahu doesn't even have a majority government. he rules only because he can cobble together a coalition government.

Of course if you have a really good look at some of the boys and girls with Harper, on this trip and some of their past comments, you can see not all have admirable attitudes towards others.

Harper's speech insulted the Arab/Israeli members of the Kinesit. Good on them for walking out.

But they claim to speak for their countries -- two unrestrained egos.