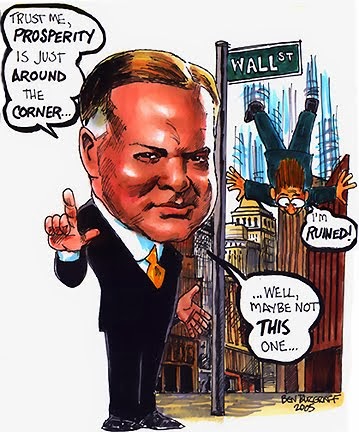 Some people rejoiced last week, when Bank of Canada Governor Stephen Poloz announced that interest rates would remain where they are. But Scott Clark and Peter Devries write:

Reading between the lines suggests that the Bank does not expect a strengthening in employment growth and any significant reduction in the unemployment rate over the next eighteen months — before the 2015 election, in other words. And there is very little the Bank can do about it, short of lowering the overnight rate further.

The simple fact is that there is a need for more aggregate demand in the economy. This has been the case for the past three years. Since 2010, growth in output and jobs has been falling and in 2013 only 102,000 net jobs were created; 60,000 full-time jobs were lost in December alone. Unused capacity in the Canadian economy has been growing for the past four years.


However, Jim Flaherty  -- or rather Stephen Harper, who is Canada's real Minister of Finance -- is not concerned about  the lack of demand:

Mr. Flaherty is simply not prepared to do what is necessary to raise aggregate demand in the economy. For years, the government’s strategy has been to cut the deficit it created and hope that exports and investment would fill in the gap. This hasn’t worked. . . Even the International Monetary Fund thinks he’s wrong. It has recommended that, in the absence of a strong recovery in growth and job creation, the date of deficit elimination could be delayed.


Instead, Flaherty and Harper have decided to follow Andrew Mellon's advice to Herbert Hoover: “Liquidate labor, liquidate stocks, liquidate the farmers, liquidate real estate.” In their quest for re-election, they are slashing, burning and not spending. Jason Fekete reports that:

Approximately $10 billion of authorized budgetary expenditures have gone unspent each of the past three years, with the government forecasting departments and agencies will spend $7 billion less than authorized in the current 2013-14 fiscal year.


For the Harperites, history is all about military prowess. It has nothing to do with economics, which they believe exists outside history, and is governed by hard and fast rules. Unfortunately, they are doomed to repeat history.

Email ThisBlogThis!Share to TwitterShare to FacebookShare to Pinterest
Labels: Harper and Hoover

Harper is Canada's nightmare. Cutting services doesn't improve the economy. cutting services means cutting jobs. By cutting 10K federal jobs and now wanting to cut 8K jobs at Canada Post, the country will have lost 18K living wage jobs. So what happened to these people and their children? Not only aren't these people not making "living wages" when they are laid off they loose their dental plans, health plans, which invariably impacts local economies.

Manufacturing is not picking up in Canada, so there aren't jobs there. Canadians are starting to bottom out, financially. there isn't an increase in interest rates because if there is the country would see a huge amount of middle and working class people declaring bankruptcy.

For those of us who lived through the 80s and early 90's when interest rates went as high as 19% for a mortgage, we know what happened to many people. They lost their homes. Even if interest rates went up to 10%, a goodly number of Canadians would be handing the keys to their homes back to the banks. it would be a disaster in Canada. that's why the cons aren't increasing interest rates.

Stevie and Jimbo know full well that what they're doing and/or not doing doesn't work for the country as a whole. Simply, they don't care. They only care for their rich well healed oil buddies and bankers getting even richer. In fact, as I've always said, Stevie feeds off the suffering of others. I bet when he passes a homeless shelter he giggles and snickers and smiles. Human suffering is what gets Steve out of bed in the morning. His reason to live. Yes, he is that miserable.

He's no ray of sunshine, CK. There are all kinds of people for whom he has no time.

The disaster in the U.S. housing market is still roiling that economy, e.a.f. And there have been lots of warnings about our overheated housing market.

We could still face our own disaster on that front.

I just wonder what assets Flaraty has liquidated on my behalf. Probably we will find out next time another party takes power.

These are people who are not known for providing details, Steve. We'll only find out how much damage they've done when a different government takes power.