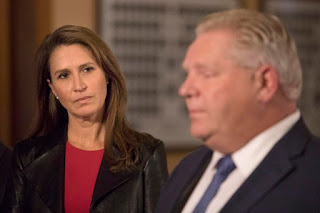 The dream harboured by the Ontario attorney general when she first entered elected politics in the summer of 2017 was that one day she would become premier of Ontario and eventually move on to become Canada’s first elected woman prime minister.


But, after being elected, it fell to Mulroney to defend Doug Ford's decisions -- the latest being on French minority rights:

The latest blow to the dream came two weeks ago when Premier Doug Ford’s government announced it was eliminating the position of French Language Services Commissioner and scrapping the plan approved by the previous Liberal government to create a French-language university in 2020.

As the minister responsible for francophone affairs, Mulroney was tasked with selling the cuts to outraged Franco-Ontarians as well as francophones in Quebec and other provinces.

She did so with great gusto, despite widespread condemnation about the cutbacks from across the country, including from federal Conservatives who fear a backlash in Quebec and in Ontario ridings with a large French-speaking population.

Without shame or hesitation, Mulroney insisted the moves were necessary as part of efforts to reduce government spending. She also tried to blame both the former Wynne government and the federal Liberals for the cuts.


This wasn't the first time she stepped up to defend Doug Ford's stupidity:

The first came in late June when in addition to her post as attorney general she accepted the downgraded role as minister responsible for francophone affairs, which no longer was a full cabinet position. She should have insisted Ford retain the post as a full ministry, as it was under the Liberals.

The second came in July when Ford failed to include a single word of French in his initial throne speech, an insult to Franco-Ontarians. Either Mulroney didn’t raise the point in advance of the speech or Ford simply ignored her. Regardless, she appeared unconcerned or ineffective.

The third came in September when Ford said he would use the “notwithstanding” clause in the Charter of Rights and Freedoms to override a judge’s ruling that Ford’s move to cut the size of Toronto city council in the midst of an election was unconstitutional. Mulroney defended Ford’s action, despite almost universal condemnation, including from her father.


Rather than shaping government policy, it has fallen to Caroline to defend it. She's in a marriage that may well end in divorce. But that divorce would require displaying some integrity -- which, at the moment, is nowhere in sight.

Image: (CHRIS YOUNG / THE CANADIAN PRESS
Posted by Owen Gray at 10:25 am

When I read this article, Owen, all I could think of is that it is a fitting price for Caroline Mulroney to pay, given her well-demonstrated propensity for political prostitution. I have not a whit of sympathy to spare for the likes of her.

My impression, Lorne, is that souls are being sold at a discount these days.

.. its impressive and/or oppressive to regard the vast & diverse spectrum of 'fake public service' - it can range from incompetance or outright deceit.. on into crude ideology.. or sellout money grabbng.. all of them lathered in lipstick. Ms Mulroney seems either wishy washy.. or chose the wrong Party.. (which likely saw her as votes on the hoof - now there's idealism in motion eh?) Kind of a female version of Kevin O'Leary.. and 'just not ready'

Whatever.. she saddled up and rides with Dough Ford.. the former loud and glib councilman from Toronto City Hall.. and that about sums up her chops.. her interest in public service, or her riding electorate's needs, dream and wishes.. once elected she brings zllch aside from partisan toxicity

All across this land, we see people seeking and attaining power who haven't the least interest in constructive directions for society: they are entirely occupied by considerations of their own political fulfilment.

It seems to me, sal, that hubris drives those in political office these days. Public service isn't even on their radar.

Danneau makes an excellent point. The bond between the public and their elected officials is broken. Special interests - economic or ideological - now prevail over the public interest. The Conservatives walk that path but so too do the Liberals. Trudeau's acolytes like to imagine him as the opposite of his predecessor and yet he perpetuates many of Harper's policies.

Big Money has found its way to the root of our politics, Mound. And it buys what and who it wants.

Caroline showed her hand very early during the "Not withstanding" fiasco. As for the new development of money buying power. I remember I found it odd when the Muldoon started wearing Gucci shoes. Awhile before the brown bags of cash came into the picture.M.J.W.

A friend of mind went to St. FX with Mulroney, zoombats. He didn't like him then and he doesn't like him now. The clothing may have changed. But the character hasn't.