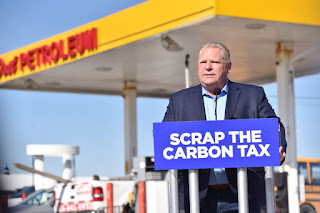 Welcome to Ontario’s upside down world of global warming — a province where Progressive Conservatives who once promoted environmentalism are now wishing it away. From one week to the next.

We shall see in the coming days precisely what Premier Doug Ford proposes as a replacement for the carbon pricing policy — pioneered by economic conservatives in Quebec (Jean Charest) and California (Arnold Schwarzenegger) — that he so proudly dismantled upon winning power.


Having done away with the office of the Environmental Commissioner, Ford has transferred those responsibilities to the Auditor General. But a look at Bonnie Lysyk's record on that file shows why Ontarians are right to be worried:

The mandate of Lysyk’s office is to deliver value-for-money audits ensuring taxpayer dollars are spent frugally — not necessarily environmentally. Investments in renewable energy or conservation can pay economic dividends, yet those arguments have eluded the auditor in the past.

In her 2016 annual report, the auditor demanded that the estimated cost of cap and trade be prominently displayed on natural gas bills, month after month. Yet the government had already disclosed the imputed $5 average cost, so what goal would be served by repetitively shining a spotlight on a recurring cost of doing business — paying a price for pollution — other than to call attention to a potential political irritant?

Remarkably for an auditor, Lysyk paid for a public-opinion poll, commissioned by her office, to ask Ontarians if they wanted to be reminded of this charge month after month — almost as if she were a Tory tax-fighter. Bizarrely for an independent officer of the legislature, she insisted that the Liberals order the arm’s length Ontario Energy Board to reverse the decision it had already taken that such disclosure was pointless — an auditor second-guessing a regulator.

In that same report, she also criticized the Liberal government of the day for an advertising campaign showing a “well-known Canadian environmentalist” — David Suzuki — warning students about the impact of global warming. The ad “appeared designed to create apprehension about the effects of climate change so viewers will be more likely to support Ontario’s Climate Change Action Plan.” Imagine that.

In her 2015 report, the auditor noted that in times of energy surplus, “Reducing electricity consumption through conservation efforts is of little value.” In a previous report, she blamed the phasing out of coal — for which the Liberals had won an electoral mandate — for raising hydro prices.

And so an auditor who wanted to whip up public opposition to the cost of cap and trade, who argued against ads that call attention to climate change, who criticized conservation, and who fretted about phasing out coal, shall now be Ontario’s environmental steward?


Rather than doing something for the environment, Mr. Ford has decided to beat it into submission.