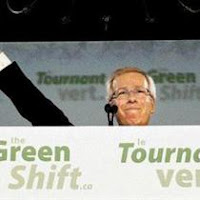 The upcoming federal election could be one of the most significant in Canadian history. That may seem like a risible claim, because neither Mr.Harper nor Mr. Dion are charismatic personalities. But, with the introduction of the Liberals' Greenshift platform, the next election will not only be about the environment, which the American scientist James Hansen says has reached a "tipping point." It will also be about the Canadian tax system -- and that has far reaching implications for public policy in this country.

The plan still needs work. As Carol Goar reported this week in The Toronto Star, if Dion's plan is adopted, it is not clear who will win and who will lose. "Putting a price on pollution would hurt some regions more than others," she wrote. "The impact would be particularly severe in the industrial heartland, which is already reeling from high energy prices and a sputtering economy; and the western oil sands, which spew huge amounts of greenhouses gases into the atmosphere." On the other hand, Goar pointed out that Dion's policy shift would "transfer wealth from the rich to the poor; from the oil patch to the rest of the country; from the coffers of big business to the pockets of low income Canadians." It would be the equivalent of Franklin Roosevelt's New Deal, which shifted wealth down the economic ladder, instead of concentrating it at the top of the economic mountain.

Roosevelt faced bitter and howling opposition -- from those who accused him of being a traitor to his class -- and Dion should expect the same reaction. It started even before the program was announced. Last week, Mr. Harper -- the leader of a party which (according to columnist James Travers) is "an unsettling mix of defensiveness and aggression"-- called Dion's plan "crazy" and "insane" -- a policy which would "screw everybody."

So the debate has begun. Well, the potential debate has begun. The truth is that debate is not the Harper government's strong suit. Bob Rae has observed that, rather than rebutting proposals with facts, this government counters with accusations which are the equivalent of "you're fat and you're bald."

Roosevelt came to power in a moment of crisis, armed with superb communication skills. And country squire though he was, as the American journalist Bill Moyers wrote, people like his father -- who only had a grade six education -- always felt that they had a friend in the White House. What the "the quality" never understood was that there were a lot more people and a lot more votes in the elder Moyers' social circle.

Stephane Dion has not displayed strong communication skills. And it would be a mistake to underestimate the power and sophistication of the Conservative propaganda machine. But if Dion can convince Canadians of what Martin Luther King (and Barak Obama) have called "the fierce urgency of now" -- and the necessity of a Canadian New Deal -- voters may, indeed, buy his Greenshift.

Most elections are pedestrian affairs, about replacing a tired government with a new one -- or floating in a self satisfied stupor. But, occasionally, nations undergo profound changes. We used to make our living selling furs. Then we sold wheat and the resources under our feet. After World War II, we converted our defense plants into factories to meet consumer demand. Like it or not, the world changes. The next election could change our part of the world as we know it. However it turns out, it's bound to be a wild ride.
Posted by Owen Gray at 9:41 am

Email ThisBlogThis!Share to TwitterShare to FacebookShare to Pinterest
Labels: Greenshift

One of the greatest challenges faced by Dion will be to get a fair hearing in Canada's right-of-centre media.

This, of course, is a problem the NDP has faced for years.

A group like The Canadian Centre for Policy Alternatives is described as "left-leaning"; on the other hand, the Fraser Institute--an extreme right-wing group--is presented as 'expert' mainstream comment.

There is a growing disconnect between editorial comments and Canadian's views expressed in polls.

In the next election, with so many economic interests in play, it will be interesting to watch media coverage of Dion's proposals.

This election will be as important -- and as hard fought -- as the Free Trade Election of 1988.

One can only hope that Canadians,who are well acquainted with winter,will know when they're being snowed.