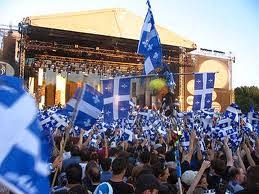 It has been remarkable how sanguine political commentators have been about the place of Quebec in Stephen Harper's Canada. Back in August, in the Globe and Mail, John Ibbitson wrote:

The fading of Quebec in federal politics is not a temporary event. It has been going on for years and will continue for years to come.

If the federalist answer to Quebec separatism is to enmesh Quebec within the federal fabric, that answer is failing.


The conventional wisdom seems to be that the province will settle into its own parallel universe and quietly let the rest of Canada -- read  "the Harper government" -- go its own way.

But Robert Asselin writes that Quebec is a land of unfulfilled expectations. Even though a new provincial party, the Coalition pour l'avenir du Quebec -- the Coalition for Quebecs's Future (CAQ) -- and an official NDP opposition promised a brighter future for Quebec, not much has happened:


Under the weak political leadership of Nicole Turmel, the inexperienced NDP caucus fumbled, offering a mediocre parliamentary performance. On the most important issues, the NDP was unable to get traction on most attacks they launched against the government, leaving Prime Minister Harper almost alone on the ice.

On issues that were crucial to Quebecers, they were invisible. To make sure Quebec’s opposition to the Conservatives’ omnibus crime bill (C-10) was heard, Quebec Justice Minister had to come to Ottawa to denounce it. On the appointment of unilingual anglophones to the Supreme Court and Auditor General positions, the NDP was remarkably inefficient. People who thought this new cohort of NDP MPs would bring some edge and renewal in Ottawa are now perplexed.


As for the CAQ, Asselin writes that the party's leader, Francois Legualt, is more of a beancounter than a leader. His "accountant’s instincts outshadow his visionary pulses."

So the powers-that-be have concluded that Quebec has gone back to sleep. Those who have reached that conclusion are profoundly ignorant of life in la belle province. It is precisely when Quebec is "sleeping" that revolution is brewing.

Those who ignore Quebec do so at their peril.

Just a brief postscript. My wife and I will be gone for the next couple of days to attend our son's wedding. I'll be back posting in the new year. Happy New Year to all. Bonne annee a tout le monde!

Email ThisBlogThis!Share to TwitterShare to FacebookShare to Pinterest
Labels: The Coming Upheaval in Quebec

Ibbitson is a partisan hack anyway.

We have a media that almost unilaterally endorsed the anti-democratic, contemptible harpercons.

Nothing a minority opposition says will have much effect in practical terms, and it's up to the media to see that things "stick" in the media or whether they quickly disappear.

Ibbitson is engaging in self-fulfilling prophecy. Plus, he's a creep.

To be honest, thwap, I thought Ibbitson's book on the Mike Harris years was pretty accurate. But his take on Quebec is simply misinformed.