It's All About Contempt 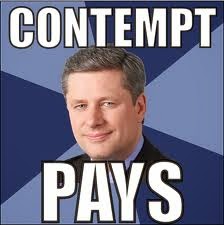 When the Harper government was found in contempt of parliament, the prime minister defined the problem as a not having enough votes. It was, he said, "simply a case of the other three parties outvoting us."   With a majority, he now argues, there can be no such thing as contempt.

But, in Friday's Globe and Mail, Peter Russell asks a seminal question about  how we are governed:  "Does it matter if our laws are passed illegally?" The question arose after the government decided to ignore a federal court decision which held that Bill C-18 -- the bill to abolish the Canadian Wheat Board -- was illegal. The Harper government simply decided that it could ignore all legal precedents and kill the Wheat Board.

Previous legislation guaranteed farmers a referendum about future changes to the Wheat Board. Russell writes:

The government has defended its action constitutionally under the banner of parliamentary sovereignty. But against this position is the view that Parliament can bind itself as to the “manner and form” of future legislation, a view supported by many constitutional scholars in Canada and other Westminster parliamentary democracies. Taking this view does not mean that Parliament can never change its mind and rescind legislation passed by previous Parliaments. But if it is going to depart from a process of law-making that an earlier Parliament committed to, it must do so explicitly and repeal the legislation.


The government took the position that, with its new majority, it can do what it wants. It has no responsibility to honour promises made by previous governments. By that logic, it has no obligation to honour previous promises about the Canada Pension Plan, Old Age Security or Medicare. A majority government only requires approval in a general election. All other checks and balances then become null and void.

Russell warns his readers that:

Canadians should understand that at stake here is not just a technical point of law, but the integrity of parliamentary government. In placing Section 47 in the Wheat Board Act, Canada’s 36th Parliament made a commitment to grain growers that it would not consider changing the rules for marketing their crops without their consent. To hold that such a promise means nothing once another party has a majority in the House of Commons is to deny Parliament the capacity to make such commitments to citizens whose interests are so directly affected by legislation.

Email ThisBlogThis!Share to TwitterShare to FacebookShare to Pinterest
Labels: The Canadian Wheat Board

Now we are left to wonder what will happen when this issue eventually get to the Supreme Court. Will the Harpercons attempt to ignore the SCoC and thereby cause a constitutional crisis? Let's face it, if this style of governing continues unchecked, we will eventually find ourselves at a constitutional crisis and that is when we will really see whether the Canadian people are willing to stand up for principle or not.

Given who these people are, Kirby, I would not be surprised to see a constitutional crisis in the next four years. After all, their attempt to savage coalition government as a legitimate outcome of an election is a clue to how far they are willing to push the envelope.

The Canadian people will eventually have to decide how much they cherish democracy.