A Matter Of Trust 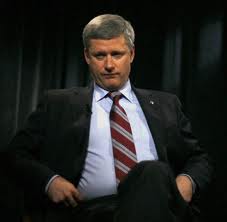 "Trust -- or the lack of it --" Tasha Kheiridden writes, "can make or break a political career." She then goes on to list three politicians who lost the public's trust and retired quickly -- the mayors of Montreal and Laval and Dalton McGuinty.

Which  brings us to Stephen Harper. The 2012 Americas Barometer poll is not good news for the prime minster:

The survey of 40,971 people in 26 countries measures people’s trust in their politicians and institutions. It reveals that only 16 per cent of the 1,500 Canadians polled place “a lot of trust” in Prime Minister Stephen Harper. Keith Neuman of Environics, which did the Canadian portion of the survey, was quoted by the Globe and Mail on November 12 as saying, “In an international context, Harper has a lower level of trust than almost every other national leader in the hemisphere.” Worse yet, he added that, “Canada hasn’t made any progress [on a number of key rankings] in recent years, and it has lost a bit of ground on others in the last few years. The gap with other countries is smaller than it was before.”


One wonders if the news bothers Harper. He appears to only care about one poll -- the next election. And the chances are that he will make it to the next election. But the poll brings into question how well Harper's program and record will sell.

For there is also the problem of what has happened to the political culture since Harper's arrival. Kheriidden writes:

Attack ads have become the norm, and the Conservatives have become very good at them. The Tories have also become embroiled in two scandals involving questionable and/or illegal campaign practices: the In and Out Scandal, which saw the party pay over $230,000 in fines for violating spending laws, and the Robocall voter suppression scandal, which continues to be investigated by the RCMP and Elections Canada.


Most politicians eventually do themselves in. Perhaps the Americas Barometer poll is a signal that Harper is on on the way out.
Posted by Owen Gray at 9:42 am

Email ThisBlogThis!Share to TwitterShare to FacebookShare to Pinterest
Labels: Distrust Of Harper

Nothing unusual. That's how it's done in a Communist country. Also done in a dictatorship government.

Harper has no ethics nor morals what-so-ever. Harper lies, deceives, is corrupt, thieves, uses dirty tactics, dirty politics, and (he cheated to win the election), my own personal opinion. I do know, I'm not alone in that opinion.

Over half of Canadians did not want Harper as P.M. We knew that. If we knew it, so did Harper.


In a Communist country or a Dictatorship. There is no Democracy. No Civil Rights and Liberties. No Human Rights. Most certainly, no Freedom of Speech.

The Federal election was fouled and dirtied by, the robo-call election fraud. The election is not valid. Harper has no right, to be P.M.

Harper's childish attack ads and name calling are, the only way he can win. Harper can't win honestly, democratically nor fairly

Dictators, Stalin, Hitler and Mussolini had all of those, very same character flaws. The most dangerous flaw of a dictator is, paranoia and being obsessive about control.

And Harper is certainly obsessive about control, Anon.

Maybe it's time progressives really take control by not playing nice anymore. Perhaps we should tell pollsters that we support Harper in droves and then show him what we really think at the ballot box. He plays his dirty tricks because he knows that 60% or more Canadians hate him.

I know that polls didn't play as significant a role when Kim Campbell was up for election but sheesh, voters at that time must have kept mum about how much they despised the Tories to trounce them so badly. I remember that 2 seat outcome being a total shock. (So, hint, hint - let's do it again.)

Perhaps he'd be as shocked as Mitt Romney was, Bejiing.

That said, progressives are going to have to think strategically. Harper knows that if he can divide the progressive vote, he can win.

The most unfortunate thing is, Steven Harper does not care about you, your family, this country.

He never has; it was all about power and control which he feels he now has and can now do whatever he wants even that he got the small majority with less than half of Canadians voting. That in itself is shameful, but Steve, it does not give you or your cons the right to sell us off, give us away.
It does not give you the right to lie and cheat.
What will your grand kids think when the read the history books on the worse PM in this country, and I believe you may have surpassed Mulroney now, maybe, but if not, pretty close. Make your kids proud Steve and pay attention to what "Canadians" are saying, not just the corporations and your followers.

It is little wonder people don't trust Harper. We have had 2 budgets which were not debated properly. People don't know what is even in them. They get passed & then people find out.

People are fed up with Harper & his cabal trying to remove our rights & freedoms. They see Harper running 1812 ads but not paying for veterans rehab & funerals.

We have seen the lack of housing on the reserves but haprer still spends billions on wars. People are getting fed up. He isn't a trustworthy type. Some saw it from the beginning, some are just waking up. He needs to go. He is a dictator who is selling Canada to a communist country which is sorely lacking in freedom, human rights, etc. I am sure Harper will want to bring china's method of dealing with its citizens to Canada. He needs to go sooner than later.

Unfortunately, Anon, Steve only cares about the opinions of the 40% who voted for him. He'll demonize everyone else.

Things won't change until the 60% who didn't vote for him vote strategically and send him back to Calgary.

The poll would seem to indicate that Canadians are, indeed, waking up, e.a.f. Once they wake up, they're going to have to vote them out of office.

We have plenty of evidence of what they do when they're the government.