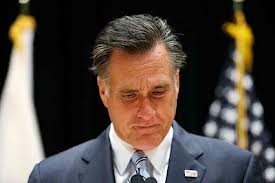 Last week, Garry Wills -- who has made a career of evaluating America's presidents and would be presidents  -- asked in the New York Review of Books:

What lessons will Romney have to teach his party? The art of crawling uselessly? How to contemn 47 percent of Americans less privileged and beautiful than his family? How to repudiate the past while damaging the future? It is said that he will write a book. Really? Does he want to relive a five-year-long experience of degradation? What can be worse than to sell your soul and find it not valuable enough to get anything for it? His friends can only hope he is too morally obtuse to realize that crushing truth. Losing elections is one thing. But the greater loss, the real loss, is the loss of honor.


Romney lost because a majority of Americans -- admittedly a narrow majority -- realized that he would say anything to win. He was, in the words of Canadian commentator Andrew Cohen, "a confused standard bearer of no philosophical address."

But yesterday, in a call to big donors, Romney essentially repeated what he had said to other backers in that embarrassing 47% clip:

According to reports in the Los Angeles Times and New York Times, the former Republican nominee said during a call with donors on Wednesday that Obama had been “very generous” in doling out “big gifts” to “the African American community, the Hispanic community and young people” as well as to women throughout his first term. Benefits such as access to “free health care,” guaranteed contraceptive coverage, more affordable student loans, and “amnesty for children of illegals,” all combined to give the president a decisive edge in popularity.


The truth is that Romney has always had a philosophical address. It's just that, when he was running for president, he didn't want voters to know where he lived. He has now confirmed that he resides in a gated community.

I don't get Romney's point. Is it wrong for a President to try to meet the needs of various constituencies, thus having a record of achievement to run on.? Should people be expected to vote against their best interests. I am surprised at how many actually did,gibing him more vots than he deserved. His constituency of the rich, super rich, CEO's, ideologically rigid political right, racists, and religious right, was not broad enough to elect him. In fact, I am surprised that he got the number of votes he did get. Ir should be obvious to all that the Republican base is too small. There are those within the groups they ignored that share some conservative values but refused to support a party that hates them and ignores their needs. As long as there is "one man ,one vote" (and massive voter suppression fails) Republicans will never win.

Some people claim that the Republicans are currently re-evaluating their positions, Philip.

If Romney speaks for the vast majority of them, there will not be much soul searching.

Therefore. Romney and Harper are birds of a feather. Both of them are false prophets.

Was not Harper the one, who condemned omnibus bills? What Harper accuses others of, he does himself, only a thousand fold worse.

Romney reminded me too much of Harper. Romney too, spoke of embracing Communist China, as Harper has done. Just imagine Harper and Romney plotting together?

It's not too much of a stretch, Anon, to conclude that Harper would be much more comfortable with a President Romney.

Canadians, as well as Americans, are lucky that Romney can go back to his job at Bain Capital.

it is a truism to state that you can't teach an old dog new tricks, Owen. However, I suspect that the inability to learn from past mistakes is almost genetically encoded in the far-right, both young and old.

What is truly puzzling about the far right, Lorne, is how immune they are to facts.

Mistakes are not what they make. It's always other people who rain on their parade.

Well I hope Romney's run for the presidency will serve as a permanent reminder of what that 1% really thinks. They have no intention of sharing any of the wealth they generate and that includes creating decent paying jobs for the masses. They are obsessed with their own wealth and will lie about everything else to retain power, including manipulating religious values to keep the population in line.

Sometimes I think Harper is the water bearer for that 1%, working slavishly in the hope that he will one day join their rank.

It's pretty clear that Harper is working for the 1%, Bejiing. And he makes an excellent courtier.

As for joining their ranks, he would be wise to remember that courtiers serve at the king's pleasure. But no courtier ever becomes king.