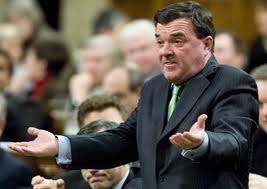 Tom Walkom writes, in this morning's Toronto Star, that Stephen Harper is a victim of his own success. That was the reason he and Jim Flaherty were sending mixed messages last week. Flaherty said that the government's goal of balancing the budget by the next election would have to be postponed:

In laying out all of this, Flaherty was onside with most standard economic analysis. The International Monetary Fund has warned that the teetering world economy cannot withstand too much fiscal austerity. It says that countries with some leeway — like Canada — should move cautiously to balance their books.

Bank of Canada governor Mark Carney has said that if the U.S. forges ahead with its so-called fiscal-cliff plans to slash government spending, the Canadian economy will go into a tailspin.

What Carney didn’t say, because he didn’t need to, is that now — with the U.S. in turmoil — is no time for Ottawa to make deficit reduction its overriding priority.


Then the Conservative base erupted. Michael Den Tandt wrote in the Postmedia papers that "conservatism is in retreat;" and the Canadian Taxpayers Federation angrily retorted that the Harper government might renege on the tax breaks it promised in the last election.

Enter Stephen Harper, who stoutly proclaimed that his balanced budget promise would be kept. Flaherty meekly fell in line. "Fiscal predictions, he told reporters, didn't mean that much."

Walkom writes that, having promised to balance the nation's books by 2015, Harper finds himself in a hole:

Will all of this be enough to satisfy Harper’s hard-liners? I’m not sure it will. To keep together the coalition that gave his Conservatives a majority government, the prime minister may have to do something really stupid.


It wouldn't be the first time he's done something stupid. One of the reasons he's in a hole is that 2% cut in the GST.

Flaherty bleats about, wealthy corporations are sitting on all of the money. Meanwhile, Harper gives billions of our tax dollars to, corrupt greedy banks, mines, big business and Harper's favorite charity, big oil. They are also given, huge tax reductions.

Harper and his so called Conservatives, are the worst thieves and abusers of our tax dollars in Canadian history.

Harper gave a speech in New York, at the Council of Foreign Relations. This was Sept 25/2007. Could this be the stupid thing Flaherty is talking about? Flaherty also said, Conservatives are no more. We said that for years, Harper was no Conservative.

Seems to me. Harper is dividing Canada, between Communist China and the U.S. Harper has made sure, there are no jobs for Canadians, in the resources arena.

China gets the tar sands, plus all of the jobs. Harper is permitting all company's to hire that cheap labor.

The U.S. Veterans are coming to build the Key Stone. They are also bringing American oil workers. The U.S. won the contract, tearing down of the old smelter in Kitimat. They are building the new smelter. Their own workers were brought to take those jobs. The mines the U.S. owns in Northern BC? They are bringing their own workers with them.

Harper's best buddy Gordon Campbell, gave BC's resources to Communist China, a very long time ago. The Chinese were sent to school, to learn 100 English words, so they can work the BC mines. So far, there are 2,000 Chinese coming to BC. If China owns any of the new mines in Northern BC, they will take those jobs too. Campbell shipped BC mills to China, along with BC's raw timber.

CSIS warned of Red China's huge inroads into Canada. BC was specifically named.

As much as we posted all of this crap going on in BC, during Campbell's time in office. Absolutely no-one would listen.

Nor, did anyone do anything about, Harper cheating to win the election. Harper's robo-call cheat, was noted before the election. But still, that monster is in office.

He stays in office -- and he will be there after the next election, unless progressives unite to defeat him, Anon.