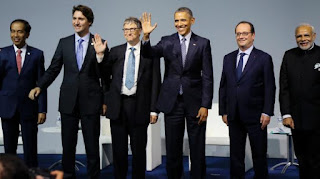 One of the images which emerged from the Climate Conference in Paris was of Bill Gates standing with the leaders of nations. That image makes Gerry Caplan  feel uneasy:

The all-male photo included the heads of five governments and, in the middle, Bill Gates – an elected leader of nothing, but head with his wife of a multi-billion dollar charitable foundation funded by them from his unfathomable personal wealth.

Last year, the Bill & Melinda Gates Foundation announced an $11-million grant to – wait for it – MasterCard, to establish something called a financial inclusion lab in Nairobi, Kenya. After three years, if all goes well, MasterCard may be willing to foot the bill itself. The $11-million is an outright gift, not a loan, from Gates to MasterCard, and God knows that MasterCard needs it. In 2013, the company earned a profit of $3.1-billion. Its stock has jumped 330 per cent over the past five years.


Linsey McGoey, a former advisor to the World Health Organization, has coined a phrase for this kind of giving  -- philanthrocapitalism. McGoey has documented a number of Gates' donations:

According to Ms. McGoey, this little caper “was only the most recent in a long list of donations that the Gates Foundation has offered to the world’s wealthiest corporations. From Vodafone, a British company notorious for paying zero corporate tax in the United Kingdom, to leading [for-profit] education companies such as Scholastic Inc., the Gates Foundation doesn’t simply partner with for-profit companies: it subsidizes their bottom-line.”


Caplan writes that it's hard to know whose interests Gates is serving:

Of course you can’t accuse the Gates family of enriching themselves in the name of doing good. It’s what constitutes “doing good” that’s at issue, and the right of private zillionaires to impose their views, biases and ideologies on the public sphere.

Like all UN agencies, WHO is very far from perfect. But at least its staff, who make health-related decisions that touch the lives of tens of millions of people, are experts in their field. Like them, Bill Gates has many preferences that he feels very strongly about.

For example, as The Lancet once pointed out, far from being brilliantly effective, as he insists, Gates Foundation grants “do not reflect the burden of disease endured by those in deepest poverty.”

Something to think about as Christmas approaches.

Email ThisBlogThis!Share to TwitterShare to FacebookShare to Pinterest
Labels: Philanthrocapitalism

Couldn't the same accusations be made about the Facebook geek and his wife? Just saying.

Absolutely, zoombats. Whose interests are being served?