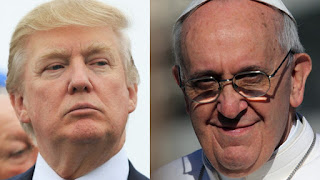 It's a sure bet that two men will be in the news a lot next year -- Donald Trump and Pope Francis. No two men could be more unalike. Michael Harris writes:

The Donald holds the view that too much is never enough — a fact nicely captured in his cover-shot in the September 7, 2015 issue of Bloomberg Business Magazine. There, he is surrounded by a pile of cold, hard cash — the patron saint of the uber-wealthy. Had Trump been there when Moses came down from Mount Sinai with the Ten Commandments, he probably would have kept on dancing around the Golden Calf.


Francis has very definite views on wealth and what should be done with it:

Here’s what Pope Francis had to say about that Bible story: “The worship of the ancient Golden Calf has returned in a new and ruthless guise in the idolatry of money and the dictatorship of an impersonal economy lacking a truly human purpose. The worldwide crisis affecting finance and the economy lays bare their imbalances and, above all, their lack of real concern for human beings; man is reduced to one of his needs alone: consumption.”


Francis is not a stranger to a rough and tumble world. Before he joined the Jesuits, he worked as a bouncer. Some would say that Trump still is a bouncer. For Trump,

the rich know best. By that, Trump apparently means denominating worth only in wealth, taking a disproportionate share of the world’s resources, bending everyone else to America’s interests, and creating an even more virulent strain of American exceptionalism than the one the country already suffers from.

And with his promise to create a super-military that no one would dare challenge, there are dark historical resonances.   He sounds like Benito Mussolini invoking the spirit of the Roman Empire just before marching into Ethiopia — a fascist draped in red, white, and blue who wants to “bomb the shit out of ISIS.”

Francis has quite different take on relations with the Muslim world:

The Vatican gave treaty recognition to Palestine at a time when Western governments have abandoned millions of people in the West Bank and Gaza to hopeless misery in refugee camps for decades. He has decried what he calls the new colonialism in Africa. He has said that Muslims and Christians are “brothers and sisters.” And he has also denounced the “idolatry” of money and the cult of consumerism.


The new year will offer its own take on whose vision has more traction.

Email ThisBlogThis!Share to TwitterShare to FacebookShare to Pinterest
Labels: Trump And The Pope