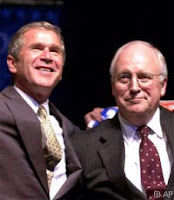 In John Huston's 1948 study of the dark side of human nature, The Treasure of the Sierra Madre, a group of bandits claim to be federal police officers. Humphrey Bogart and his fellow prospectors ask to see their badges. In a line that has gone down in movie history, the leader of the bandits replies, "Badges? We don't need no badges!" In a Hobbesian world, intimidation and brute force equal legitimacy.

The president and the vice president of the United States live in a Hobbesian world. The forget, however, that the men who founded their nation -- men they say they revere -- were products of the Enlightenment. The American Constitution was a firm and direct rebuke of everything Hobbes stood for.

It is interesting that one of the main sources of opposition to Mr. Bush and Mr. Cheney comes from former aides to Ronald Reagan, whose mantle Bush and Cheney have claimed. Last week, in an op-ed piece in the Washington Post, P.X. Kelley (a former commandant of the Marine Corps) and Robert F. Turner (who served as one of Reagan's lawyers) condemned the president's recent executive order, which "interprets" Common Article 3 of the Geneva Conventions.

They wrote, "we cannot in good conscience defend a decision that we believe has compromised our national honor and that well may promote the commission of war crimes by Americans and place at risk the welfare of captured American military forces for generations to come." Mr. Bush's order displays a long established pattern of rewriting or simply ignoring laws or treaties he finds inconvenient.

In a recent article in Slate, Bruce Fein -- who also worked for Reagan -- called for the impeachment of Dick Cheney. "In grasping and exercising presidential powers" Fein argued, "Cheney has dulled political accountability and concocted theories for evading the law and Constitution that would have embarrassed George III." Fein then went on to list a number of, what he considered, were impeachable offenses.

Most disturbing of all is Bush's attempt to thwart congressional oversight, which the authors of the Constitution took as axiomatic in any democracy. Alberto Gonzoles continues to serve as Attorney General, despite what Congress sees as his clear incompetence and less than honest stewardship at the Department of Justice. But, in a stunning claim of executive privilege, Bush has forbidden employees and former employees of his administration to testify before the justice committees of both houses; and he has gone so far as to insist that, since U.S. attorneys serve at his pleasure, he will order any government attorney to refuse to expedite any claim of contempt of congress. Finally, Mr. Bush has proclaimed that politicians have no expertise when it comes to running a war. He vows that no decisions will be made about the war in Iraq until David Petraeus reports to Congress in September -- refusing to acknowledge the fact that politicians originally authorized his disastrous invasion of Iraq and -- under the Constitution -- they have the responsibility to declare when the war is over.

As Frank Rich made clear in the New York Times on Sunday, everyone knows what Petraeus will report in September. He has already hinted at what he will say. Patraeus told the Times of London last month that September "is a deadline for a report, not a deadline for a change in policy." Remarkably, a significant number of legislators have given up waiting for Godot, but not for Petraeus. Lindsay Graham has perhaps given the most succinct summary of their position. Speaking on Meet the Press three weeks ago, Graham proclaimed that he would "not vote for anything" unless "General Petraeus passes on it."

In other words, the policy which has been applied disastrously for over four years will not change. Perhaps because Bush and Cheney worked so hard to stay out of Vietnam, they are determined to display their courage now; and they define courage as staying the course. Mr. Bush knows there will not be any change in policy because a majority in the senate is 60, not 51; and, even if that threshold were reached, it would take 67 votes to overturn his veto. So the dance continues. So far, only four Republicans have -- when push came to shove -- voted against Mr. Bush's conduct of the war.

So the burden now falls on those senators -- the old lions of the Republican Party, like Senator Warner and Senator Lugar -- who say they harbour grave doubts about the course this administration has followed. There will not be a precipitous withdrawal from Iraq. Logistically, it will take a lot of time. But, until the withdrawal begins, the bodies will pile up; and the members of the president's party will have as much blood on their hands as Mr. Bush and Mr. Cheney. Together they will have to answer the question which John Kerry asked thirty-five years ago -- long before he became a senator, and long before the Swift Boat Veterans impugned his patriotism -- "What do you tell the last man to die for a mistake?"
Posted by Owen Gray at 8:21 am

Email ThisBlogThis!Share to TwitterShare to FacebookShare to Pinterest
Labels: Bush and Cheney