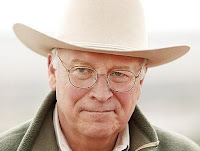 Richard Nixon once famously offered the opinion that "when the president does it, it's not illegal." After reading a series of articles in last week's Washington Post, one could be forgiven for thinking that the ghost of Nixon still stalks the halls of the White House -- or at least for concluding that his ghost has found a home and a kindred spirit in the office of the vice president.

Two months after the September 11th attacks, Cheney brought a four page document to Bush which had been "written in strict secrecy by [David Addington] his lawyer." The Post reports that, "In less than an hour the document traversed a West Wing circuit that gave its words the power of command. It changed hands four times, according to witnesses, with emphatic instructions to bypass staff review." Then Mr. Bush signed the document. When Secretary of State Colin Powell heard about this new executive order on the evening news, his reaction was, "What the hell just happened?" Condolezza Rice was reportedly "incensed." Nevertheless, the order stood. Thus, write Barton Gellman and Jo Becker, "foreign suspects held by the United States were stripped of access to any court -- civilian or military, domestic or foreign. They could be confined indefinitely without charges, and would be tried, if at all, in closed 'military commissions.'"

Having got Mr. Bush to agree to a policy which placed detainees in a legal limbo, Cheney next moved on to the question of how they should be interrogated while in custody. The problem was that the Geneva Conventions got in the way of what Cheney called "robust interrogations." So once again, Addington set to work redefining the term "torture," which the Geneva Conventions strictly outlawed.

Addington produced a document (with which the Justice Department concurred) which "prohibit[ed] only the worst forms of cruel and inhuman treatment" but which permitted many other forms of interrogation based on the newly minted concept of torture, which Addington defined as, "equivalent in intensity to the pain of organ failure . . . or even death." A subsequent memo, produced on the same day, outlined a list of approved interrogation techniques -- including waterboarding -- which the United States had prosecuted as a war crime since 1901. Addington's memo was dated August 1, 2002. It only became public knowledge on June 8, 2004. Just as Mr. Cheney had kept the detainee memo close to his vest, he likewise kept the administration policy on interrogation techniques carefully under wraps.

Besides the influence he wielded in the development of policies on detainee confinement and interrogation, it has recently come to light that Mr. Cheney for the last four years has been quietly ignoring his obligation under law to pass on documents on intelligence to the National Security Archive. His rationale for doing so is that he is not a member of the executive branch of the government -- an argument which Mr. Addington has advanced on his behalf.

Finally, just as Americans were preparing to celebrate Independence Day, Mr. Bush commuted the two a a half year prison sentence of Mr. Cheney's former chief of staff, I. "Scooter" Libby. Given his past involvement, it is hard to believe that Mr. Cheney did not have some input into Mr. Bush's decision.

Clearly, the vice president believes that he should obey laws only when it is convenient to do so. When it becomes inconvenient, he believes he has the right, by virtue of his office, to ignore them or rewrite them without congressional approval -- which is precisely what Richard Nixon maintained.

The whole Watergate saga was about who won that argument. Obviously, Mr. Cheney learned nothing from Watergate. What is even more disturbing is the thought that perhaps he believes Nixon was right.

There are those who bemoan the fact that the Democrats lack the votes to force a change of policy on Mr. Cheney and the man who has such confidence in his advice, the President of the United States. What they forget is that Nixon resigned only when a bipartisan group of senators -- led by Barry Goldwater, the godfather of modern neoconservatism -- went to the White House to tell Nixon that the jig was up and it was time to go.

To date, Republican congressmen have -- for the most part -- remained loyal to the administration. A few, like Senator Hegal of Nebraska, Senator Smith of Oregon and, most recently, Senator Lugar of Indiana have broken with the two men at the top. But, until a critical mass of Republican lawmakers have the valor to tell Bush and Cheney that the jig is up, democracy in the United States is in deep, deep trouble. The question is, how many Republicans have the courage of their convictions?
Posted by Owen Gray at 7:45 am

Email ThisBlogThis!Share to TwitterShare to FacebookShare to Pinterest
Labels: Cheney