The Difference Between a Battle and a War 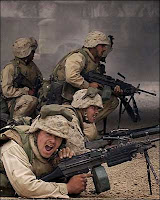 We can learn something from the British response to the recent terrorist attacks in London and Glasgow. British authorities have relied on very good police work and very effective international cooperation. The same strategy paid considerable dividends when suicide bombers hit the London transportation system two years ago.

That insight is critical as Americans begin to call for a change of strategy in Iraq. Mr. Bush, Mr. Cheney and Mr. Rumsfeld insisted that what was needed to combat terrorism was a war. And they brought all the technological resources at their disposal to effect "regime change" in Afghanistan and Iraq. But both countries have a history; and history suggests that in both countries a massive military response was -- and is -- counterproductive. The Russians tried that strategy in Afghanistan in the 1970's; and the British tried the same strategy in Iraq in the 1920's. Both Russia and Britain, despite their huge investment in weapons and human lives, failed to change the fundamental character of the region. Instead, they created what the United States has created in Iraq today -- insurgencies.

Why? Because, despite their sheer brute force, Russia, Britain and the United States -- in the tortured language of George W. Bush -- "misunderestimated" their enemy. The British have some experience with this problem. Perhaps that accounts for the way they are dealing with the attacks in London and Glasgow. But in 1776, they lost the thirteen original colonies because, as the historian Barbara Tuchman pointed out in The March of Folly, they failed to see that, essentially, the American Revolution was an insurgency and that their opponents were not ignorant and unwashed country bumpkins.

It is more than a little ironic that the present American administration is so ignorant of its country's history. It is even more ironic that thirty-five years ago the United States faced an insurgency in Vietnam which no amount of carpet bombing could bring to its knees. History -- whether ancient or modern -- has no bearing on their thinking.

The British encountered the same problem in India. When Mahatma Gandhi told the British that they would one day "walk out of India," Winston Churchill declared that he placed no store in the ridiculous assertions of a "naked savage." But Adolph Hitler misread the same Churchill and his countrymen in 1940, when his air assault on Britain produced the exact opposite of what he so confidently predicted. As a strategy, "shock and awe" is counterproductive against a population prepared to wait out the invaders.

In defending their homeland, the British have abandoned shock and awe for intelligence and leg work. Their chief weapon has been information; and they have relied on an international network of police forces and intelligence agencies to generate that information. Information has led them to abandon some of their previous assumptions -- like the enemy are all foreign infiltrators and they are all ignorant barbarians. The medical profession is the last place that any of us would begin to search for terrorists.

It is information, not ideology, which drives their strategy. The tragedy of the last six years is that the Bush administration has got so much backward. Intelligence comes before strategy; tolerance comes before democracy; battles are on going; but wars are -- or at least should be -- rare. And preemptive war is doomed to failure.

What we have needed from the beginning is a battle against Al Qaeda. All out war simply saps resources; and, as the First World War proved, it can obliterate an entire generation. The war we have waged -- including the war Canadians are fighting in Afghanistan -- is fought against an enemy who has better knowledge of the terrain and which is -- in the words of one military analyst -- willing to trade space for time. When things get tough, insurgents simply leave one area and pop up in another. What we have needed all along is a strong homeland defense, which emphasizes good police work, not a crusade to bring democracy to "savages."

Mr. Bush is not the first to misunderstand the world in which he lives and the battles which need to be fought. More importantly, he ignored advice that could have put him in a much different place. Former Secretary of State Colin Powell -- who knows something of war in general and of war in Iraq in particular -- has recently revealed that he spent two and a half hours with Mr. Bush, trying to convince him that his decision to invade Iraq was folly. "I took him through the consequences of going into an Arab country and becoming the occupiers," Powell told the Aspen Ideas Festival in Colorado. Unlike Mr. Bush, Mr. Powell has some knowledge of the limits of military power. Of the civil war the American invasion of Iraq has spawned, Powell says, "It is not a civil war that can be put down or solved by the armed forces of the United States." Unfortunately, says Powell, "It is not going to be pretty to watch, but I don't know any way to avoid it."

The way to avoid it was to do what Mr. Bush was loathe to do -- which was to avoid grandiose dreams and the rhetoric which accompanies them. If Mr. Bush had committed himself and his country to an admittedly long battle with Al Qaeda, which required stellar police work as opposed to smart weapons, he would not face the general revolt he now confronts. Having led his countrymen into a quagmire, they do not trust him to lead them out. Even his once most fervent supporters understand the fundamental miscalculation he made.

He could have won a battle against Al Qaeda. But he has lost the War on Terror.
Posted by Owen Gray at 7:30 am

Informative post. It will be interesting to see if the recent change in Premiership here in UK changes the strategy in Iraq. There are political rumblings here that Britain will start looking around for allies who are geographically closer to us.