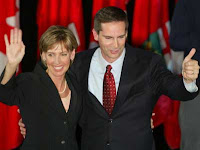 That phrase does not carry positive connotations these days. Given what has happened in Iraq over the last four years, it has come to stand for, at best, inertia -- at worst, folly. But that phrase best describes the results of the Ontario election. The number of members who were elected by each party stayed about the same. There was not much discussion of pressing issues, which everyone knows are coming down the pipe. And the answer to the question, "Do you want to change the way we elect our representatives?" was a resounding "No!" This province's voters were not feeling particularly enthusiastic about their politicians. But they weren't prepared to send them packing, either.

John Tory, who began the race as a clear favourite for premier, self destructed during the campaign; and, in the words of one wag, he created a wedge issue -- public funding for all faith based schools -- which he promptly used against himself.

Only the New Democratic Party's Howard Hampton increased his share of the popular vote -- his party harvested 19% of Ontarians ballots -- but his share of seats remained the same.

As we awoke this morning, not much had changed. But we are all aware that change is coming. One of every seven jobs in Ontario is related to the auto industry. And, as our neighbours in Michigan are well aware, that engine of economic growth is in trouble. The forest industry in Northern Ontario is also mired in an economic swamp. Pulp and paper is not the ticket to prosperity which it once was. And, while $80 a barrel oil has done wonders for Alberta's economy, Ontario buys the black stuff; it doesn't produce it.

Cynics may claim that Ontarians were playing the role of Sergeant Schultz, the dull witted soldier on Hogan's Heroes. Perhaps they "see nothing -- nothing at all." But it's probably more accurate to conclude that they simply chose the devil they knew -- because, although the Liberals do not inspire fervid devotion, they are -- generally speaking -- competent.

And Mr. McGuinty's victory was historic. It's been seventy years since the Liberal Party of Ontario won back to back elections under Premier Mitchell Hepburn. If John Kenneth Galbraith were alive, he would remind McGuinty that Hepburn's tenure was, in Galbraith's opinion, "one of the most corrupt in Canadian history." This, from a life long Liberal -- both north and south of the border.

We await the future. And we hope that -- as far as the Liberals are concerned -- history does not repeat itself.
Posted by Owen Gray at 8:46 am