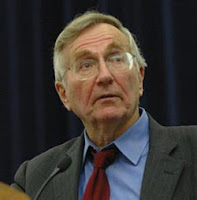 In the October 8th edition of The New Yorker, Seymour Hersh reported that Pentagon planners had, for sometime, been developing plans to attack Iran. "This summer," wrote Hersh, "the White House, pushed by the office of vice president Dick Cheney, requested that the Joint Chiefs of Staff redraw long-standing plans for a possible attack on Iran." The original plans called for a "broad bombing attack." But the redrawn plans would emphasize "'surgical' strikes on Revolutionary Guard Corps facilities in Tehran and elsewhere."

Shortly after Hersh's article appeared, Mr. Bush -- at a press conference -- declared, "I've told people that if you're interested in avoiding World War III, it seems like you ought to be interested in preventing them from having the knowledge necessary to make a nuclear weapon." One should note that the information necessary for constructing a nuclear weapon is all over the Internet. If possessing knowledge is the threshold for an attack, the entire world is a target.

Defenders of the president claim that Bush, whose command of the English language is worse than embarrassing, was merely displaying more of his shattered syntax. But, in an address to the Washington Institute for Near East Studies on October 22nd, Vice President Cheney warned, "The Iranian regime needs to know that, if it stays on its present course, the international community is prepared to impose serious consequences."

Even Republican presidential hopeful Rudy Giuliani has joined the chorus. He has vowed that, should Iran develop a nuclear weapon while he is president, he will attack Iraq's neighbour. That, he says, is "a promise."

It is interesting that all three of these men have never served in combat. And, therefore, none of them have any familiarity with the unintended consequences which accompany the use of military force -- what former Secretary of State Colin Powell has called the Pottery Barn Rule -- "you break it, you own it." It was President Kennedy's familiarity with that rule which led him to build a naval quarantine around Cuba, rather than invade that island.

As a glaring example of the Pottery Barn Rule, Iraq is Exhibit A. Yet both Mr. Bush and Mr. Cheney refuse to recognize it. It could be that they are simply dense; or perhaps, convinced of their own righteousness, they are incapable of admitting a mistake. Whatever the reason, both men appear to be drawn more to the power of myth than to the power of facts. And, when it comes to myths, there are chiefly two which, apparently, appeal to both men. The first is The Myth of the American West, where it is easy to tell the good guys from the bad guys -- and where the administration of justice rests on the principle that the guys in the white hats are quicker on the draw than the guys in the black hats. The other myth is the Myth of American Invincibility. In this myth, the American military -- like Washington's army at Valley Forge -- endures unspeakable hardships; but, in the end, it triumphs. That myth died in the jungles of Vietnam thirty-five years ago. But it was resurrected by the Neo Cons when the Cold War ended; and it was promoted by a generation of boosters who spent the Vietnam years far away from those jungles. In the last four years, the Myth of American Invincibility has died another death in the sands of Mesopotamia.

It is this mythological perspective which appears to have led the president and vice president to conclude that the U.S. can ride out the consequences of a "surgical" strike on Iraq. Having destabilized Iraq and empowered Iran, they now propose to take those intransigent mullahs to the woodshed. But, as a former senior intelligence official told Hersh, "Do you think those crazies in Tehran are going to say, "'Uncle Sam is here! We'd better stand down?' The reality is an attack will make things ten times warmer."

It would have done a world of good if the education of Mr. Bush, Mr. Cheney -- and Mr. Giuliani -- had included stints in the jungles and rice fields of Southeast Asia.
Posted by Owen Gray at 5:44 pm