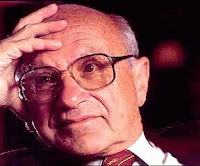 It has been almost a year since Milton Friedman's death. At the time, memorialists everywhere sang his praises. The New York Times called him "one of the 20th century's leading economic scholars;" and not one of the obituary writers failed to mention his firm conviction that human freedom and free markets were inextricably linked. He was not always so feted. The first thirty-five years of his career were spent in the wilderness -- although life in the economics department at the University of Chicago was far from shabby.

But the Keynesian Revolution had marginalized a man who felt that his country had gone off track with the New Deal. He steadfastly clung to his belief that classical economics was the equivalent of Keats' Grecian Urn, where both truth and beauty coexisted.

Then came the Cold War; and Latin American politics took a distinctly leftward turn. John Foster Dulles became Secretary of State; and he vowed to stamp out the heresy of Communism with the same zeal with which his own parents had set off for China to convert the locals to Christianity. With support from the State Department, the University of Chicago established the Center for Latin American Economic Studies; and, under the leadership of Friedman and Arnold Harberger, it took up the task of placing its economics graduates in positions of influence throughout South America.

The problem was, however, that -- as Naomi Klein tells the story in her book, The Shock Doctrine -- all attempts to implement Chicago's take on economics met with defeat at the ballot box. The reason was not hard to understand. South America had a vibrant union movement; and it had its own economic advisers -- who understood that one of the essential outcomes of Friedman's free markets was concentration of wealth at the top of society. Why should the masses vote themselves into poverty?

So Friedman advised his charges that crisis meant opportunity. When their societies were in crisis, what was required (wrote Friedman) was "shock treatment" -- an economic version of what the American military has called "Shock and Awe." The first such opportunity came when the Chilean army -- with the help of the C.I.A. -- overthrew the democratically elected government of Salvadore Allende. Before the revolt, a group of Chicago graduates had drawn up a program for a new economic order to be established after the coup.

The plotters knew, however, that there would be stiff resistance. As Orlando Letalier -- a member of Allende's inner circle -- wrote in The Nation in 1976, "The economic plan has had to be enforced, and in the Chilean context that could be done only by the killing of thousands, the establishment of concentration camps all over the country, the jailing of more than 100,000 persons in three years . . . . Regression for the majorities and 'economic freedom' for small privileged groups are in Chile two sides of the same coin." Needless to say, Letalier's opinions were not popular with the new Chilean dictator, Augusto Pinochet; and, a month after his critique of the new order appeared, Letalier was murdered in Washington, where a bomb tore apart the car he was in.

Despite the repression which accompanied the new order, Friedman flew to Santiago to act as a "technical adviser" to Pinochet. When asked about his work with Pinochet, Friedman claimed that his role was that of a physician giving "technical medical advice to the Chilean Government to help end a medical plague -- the plague of inflation." And, for awhile, the cure worked. In fact, it inspired similar coups throughout the Southern Cone of South America -- in Brazil, Argentina and Uruguay. But eventually, after all of these countries had instituted the three pronged program which Friedman recommended -- privatization of state owned enterprises, government deregulation and slashing of social spending -- all four countries collapsed under mountains of debt. The same thing happened when Friedman's formula was applied in Mexico, Russia and China. In each case, what saved the economies of all these countries was coordinated international government intervention -- something Friedman claimed was unadulterated heresy.

The story keeps repeating itself. In North America, as recent statistics have indicated (see my post for October 22nd) we are reading from the same textbook. Augusto Pinochet died -- a little less than a month after Friedman's death -- just as he was going to be tried for crimes he had committed while in power. Friedman received the Nobel Prize in 1976, just as successive coups were ensuring that hundreds of thousands of people disappeared or were forced to lie down on bed springs attached to car batteries. Another form of shock treatment was being administered during South America's long, dark night.

In Christopher Marlowe's play, Dr. Faustus, a scholar achieves fame and gains the respect of his colleagues. But he does so at the cost of his soul. Somewhere, Milton -- like the rest of us -- must be asking for mercy.
Posted by Owen Gray at 9:11 am

Email ThisBlogThis!Share to TwitterShare to FacebookShare to Pinterest
Labels: Friedman

I apologize for spamming your blog this way...I just needed to get in touch...

This is to inform you that Opinions Canada, a Canadian political blogs aggregator, has added your blog to its blogroll. If you have already accepted to be a member of Opinions Canada, thank you for your participation. Your presence is greatly appreciated. Otherwise, I hope that inclusion in OC is agreeable to you. OC includes a wide range of politcal opinions. The website is in the process of being revamped. Please update your link if you are still using the server.com URL. You can check it out here:


If you have any questions or concerns, please feel free to email me at goss98@yahoo.com
with Opinions Canada in the header.