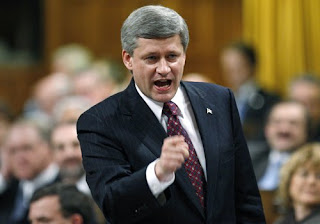 Bob Rae has an adjective to describe Stephen Harper's appraoch to anyone who opposes him: "Nixonian." Rae knows his recent history. In fact, he had a passing acquaintance with the man behind the adjective. When his father was posted to Washington in the early 60's, Rae delivered Nixon's newspaper. But the events to which Rae refers occurred thirty-five years ago. For those who lack historical context, Rae offers a more riviting image of the Prime Minister. Harper, he says, "throws for the head."

Having pledged at the recent G20 meeting in Peru to act in tandem with his economic partners, Harper made noises about providing a fiscal stimulus package for the Canadian economy. As David Olive notes in today's Toronto Star, those partners have seen the danger and are acting decisively: "Collectively the U.S., Europe and Asia have committed $2.6 trillion (U.S.) to jump start economic growth, in addition to more than $2.7 trillion so far to bail out a crippled global banking system. The pump priming and financial system bailouts are huge, in part to inspire business and consumer confidence -- equal to 7% GDP in Germany, 16% in China, 21% in Britain." Harper has tried to suggest that his government was prescient, having instituted tax cuts of $2.5 billion (Canadian) last year, before the economic storm hit. But, as Olive notes, the tax cuts "were accompanied by $4.3 billion in spending cuts, for a net stimulus that is, in fact, negative."

And, when Mr. Flaherty offered an economic update to the House on November 28th, his only concrete proposals were to cut spending by $2 billion -- cutting public funding for political parties, banning public service strikes for the next two years (even though the largest public service union signed a four year agreement on November 24th) and dismantling pay equity mechanisms. He said he was considering a stimulus package. But, as he looked into his crystal ball, he saw modest surpluses. He concluded: "I hope the economy will be strong and we won't need to have any additional stimulus in the Canadian economy, but if it's necessary to do so, we will do so."

Mr. Flaherty's phlegmatic response is in stark contrast to Barak Obama's, whose country is the destination for 70% of Canada's goods and services. "We are facing an economic crisis of historic proportions," says Obama."The truth is we do not have a minute to waste." Mr. Flaherty's constituents must take great comfort in his expertise. In his riding, Olive reports, "year over year Employment Insurance claims have shot up 96%." In the face of this data, the government has declared a seven week time out.

Obviously, Mr. Flaherty is delusional. But his delusions are a mere subset of a greater delusion, which is the lifeblood of the current government. That delusion is the narcissistic certainty that what is good for Stephen Harper is good for the country. Facts -- like Harper's claim that there were no Canadian flags behind Mr. Dion, Mr. Layton and Mr. Duceppe when they signed their accord, even though there were clearly three in the background -- are irrelevant.

Indeed, Mr. Harper last week sounded eerily like Lucien Bouchard during the 1995 referendum, when Bouchard's volcanic temper was at full bore. In in his book, The Antagonist, Lawrence Martin wrote that Bouchard displayed "a form of intolerance rarely witnessed in modern Canadian politics. Those who didn't share Lucien Bouchard's ever changing view of the world were unworthy or disloyal. Politicians regularly harpooned one another over disagreements on issues, with the disputes sometimes descending into personal put downs. But rarely did the vitriol reach this level."

Like Bouchard, Stephen Harper is a man of seething resentments. Like Bouchard he is (in public) totally devoid of humour. And, like Bouchard, he is willing to take Canada to the brink. He should be removed from office. But it's clear that his Conservative caucus, as Adam Radwanski suggested this week in The Globe and Mail, is more of a personality cult than a party. The Liberals, for all of their problems, are still a party -- struggling with a way to remove Stephane Dion before his announced departure on May 2nd.

If the Conservatives will not remove Harper, then it's up to the coalition to do so. If they fail, constitutional democracy in Canada will have been dealt a terrible blow. As a last resort, it will be up to voters -- hundreds of thousands by that time will have received their pink slips -- to fire Mr. Harper. My guess is that he will not stay around long. When he is removed from the game for throwing at the head, he will not -- like the immature child he is -- head for the showers. He will pick up his ball and go home.