Oh, What a Tangled Web 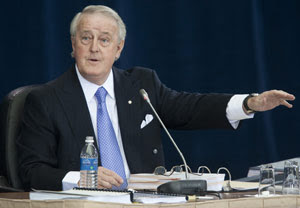 I stopped feeling angry about Brian Mulroney a long time ago. I should note at the outset that I never voted for him, so I never felt a sense of betrayal. But, because he came to office with the greatest parliamentary majority in Canadian history, I can understand why he infuriated so many of his supporters.

In fairness, Mr. Mulroney did a number of things which stood him and his country in good stead. Last week, CBC journalist Brian Stewart -- who spent most of the Mulroney years in Europe -- recalled how in 1984, after consulting his UN ambassador Stephen Lewis, Mulroney helped mobilize relief for victims of the Ethiopian famine. He asked Lewis if the UN planned to do anything about the disaster. When Lewis replied that, thus far, nothing was on the horizon, "there was a pause and a quick lets-do-it commitment from the prime minister that would launch both men onto the world stage."

Likewise,when Ronald Reagan -- fearing Communist agitation in South Africa -- refused to condemn apartheid, Mulroney spoke unequivocally against it. He stood firmly against capital puishment. And, as others have noted elsewhere, he did more for the environment than any of his predecessors.

Still, there was something unsettling about the man. He was always trying too hard to please -- like the rising young man trying to impress the boss. He was given too often to hyperbole and self promotion. And he wore the signs of his success a little too conspicuously. In the end, it was Mulroney's talent for exaggeration and self aggrandizement which did him in. Canadians always suspected that, behind the good deeds, he was looking out for his own interests and the interests of a select group of supporters, who the late Dalton Camp referred to vaguely as "offshore money."

Appearing before the Oliphant Commission last week, Mulroney dredged up all of that. Oliphant will probably agree with his claim that he has done nothing illegal. And, in the end, Mr. Schreiber will probably be extradited to Germany. But, as Jeffrey Simpson wrote in The Globe and Mail, "There is the law and there is ethics. What might be legal sometimes is not ethical. What might be legally defensible, in a hair splitting or tightly defined way, does not pass a reasonable smell test of proper ethical conduct."

And that is how the public will remember Mr. Mulroney -- as a gifted but ethically challenged prime minister. The Schreiber affair has eclipsed the times he stood for compassion and justice. He will be remembered for the three envelopes which Schreiber stuffed with cash and handed him. It's a tragic tale, ending not with a bang but a whimper.
Posted by Owen Gray at 7:28 am