Such Men Are Dangerous 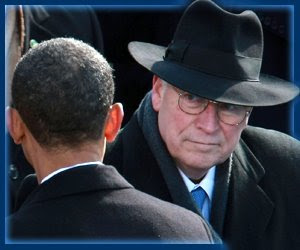 In the wake of the debate last week between President Barack Obama and former Vice President Dick Cheney, what was remarkable was not the reaction from the left -- which was predictable -- but the reaction from folks on the right, who used to be ardent supporters of both Mr. Bush and Mr. Cheney.

In the New York Times, David Brooks wrote, "But the bottom line is that Obama has taken a series of moderate and time-tested policy compromises. He has preserved and reformed them intelligently. He has fit them into a persuasive framework. By doing that, he has not made us less safe. He has made us more secure."

While Brooks praised Obama, Andrew Sullivan -- in The Atlantic -- lambasted Cheney. Cheney's speech, he wrote, was ". . . not a patriotic defence of what he thinks is best for the country; it was a vile and deliberately divisive attempt to use the politics of fear and false machismo against the stability of the American polity."

Most damning of all was Colonel Lawrence Wilkerson's take on Cheney. Wilkerson is a former assistant to Colin Powell. After the shabby treatment Powell endured at the hands of Mr. Bush and Mr. Cheney, Wilkerson, in the Washington Note, came out swinging. "When will someone of stature tell Dick Cheney that enough is enough? Go home. Spend your 70 million. Luxuriate in your Eastern Shore mansion. Shoot quail with your friends -- and your friends. Stay out of our way as we try to repair the extensive damage you've done -- to the country and to its Republican Party."

For even more abhorrent than Cheney's defense of water boarding is his assertion that, in the present circumstances, those in charge can throw the checks and balances in a democracy out the window. Cheney maintained throughout the time he spent in his "secret, undisclosed location" that the president need not be bound by the messy business of oversight. All he needed was a legal opinion that "enhanced interrogation techniques" were acceptable. Likewise, the FISA court could be bypassed when wire tapping was required.

In the end, it is Cheney's contempt for democracy which historians will remember. Unlike Cassius, he is not noted for his "lean and hungry look." But the second part of Caesar's admonition to Mark Antony bears repeating: "Such men are dangerous."
Posted by Owen Gray at 7:14 am