Starting at the Bottom 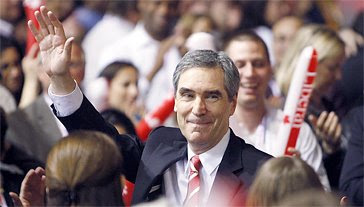 The Liberals have left Vancouver, with instructions from their leader to sell the party to the country. In the words of Jean Chretien -- almost twenty years ago -- they "have a lot of work to do." The most important work they have before them is to review and rebuild their policy platform.

For the last thirty years, the conventional way of doing that has been for a leader to gather a brain trust around him or herself, and -- after solving the problems of the world (as they perceive them) -- to issue marching orders to the rank and file. In Canada, this has resulted in the concentration of power in the Prime Minister's Office, where a handful of unelected bureaucrats dictate policy.

The result, as Toronto Star columnist James Travers has noted on several occasions, has been that, "Prime Ministers now rule between elections with the near absolute authority of monarchs." Our salvation does not rest in the hands of a benevolent dictator. For, we face more than a financial crisis. At the heart of the economic meltdown is a crisis of democracy.

Power and wealth are inextricably linked. And, as wealth has increasingly been concentrated at the top of the social pyramid, so has power. That was crystal clear when Detroit's auto executives flew to Washington in corporate jets to beg for public assistance; it was clear as bonuses were handed out to AIG executives; it is clear in the present torture debate in the United States. The powers that be want to avoid prosecutions, because they will inevitably lead back to Mr. Bush and Mr. Cheney.

Until very recently every policy announcement in Canada was made by the prime minister, while members of his cabinet nodded approvingly in the background. It is only as the economy has gotten worse that Mr. Harper has allowed his ministers to tout government largesse. Power enjoys the spotlight, until the refuse of bad policy decisions -- the decisions made by that small, self assured phalanx of "smart" folks -- hits the fan.

In truth, the policies were bad because they were made by a small group of technocrats. Democracy -- true democracy -- is a self cleansing and self correcting mechanism. That is why any true democracy has a set of checks and balances -- opposition parties, government committees, and regular communication channels between the people and their representatives -- to test and reformulate policy before it is given the force of law. The problem is that these processes take time; and they are messy -- some would say inefficient -- two phenomena which are supposedly roadblocks to true happiness.

There was talk at the end of the Liberal convention of an imminent election. That would be a mistake. What the Liberals need now is time to formulate policy -- not by turning to a small band of experts, but by heading down the pyramid and consulting ordinary Canadians. In the process, they can advocate for changes in Employment Insurance -- for those changes are sorely needed. But, until they have a plan to deal with the world as it is, they are not ready to return to power.

Such a plan needs to move wealth -- and power -- down the pyramid to those at the bottom. That will necessitate a whole series of carefully thought out policy changes.

Mr. Ignatieff likes to refer to himself as "a Roosevelt Liberal." If he is who he says he is, his policies will move wealth and power into the hands of ordinary folks. Like Roosevelt, he may draw the ire of his own social class. But things will not change unless -- and until -- that happens.

The Liberals made a step in that direction this weekend when they moved to a one person one vote system, which gives every member of the party a say in choosing their leader. It was a good beginning. But, as Mr. Chretien said, there is still "a lot of work to do."