The Burden of Neglect 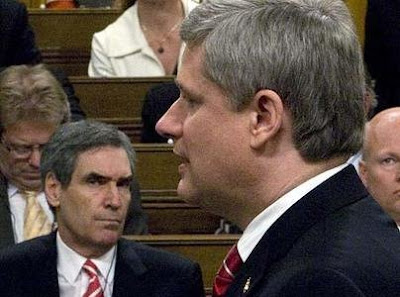 The reaction last week to The Harper-Ignatieff agreement to study Employment Insurance -- and thus avoid a summer election -- has been all over the map. Norman Spector, in The Globe and Mail, cheered: ". . . we are blessed," he crowed, "in having two potential prime ministers who, at the end of the day, know how to behave as mature adults."

Tom Walkom, on the other hand, was not impressed. "Who are these ludicrous Liberals?," he asked in The Toronto Star, "And what exactly is it that they want?"

It was Susan Riley, in The Ottawa Citizen, who came closest to the truth: "As he has repeatedly shown, compromise is a strategy, not an instinct, for Harper. This time it was easy. He gave Ignatieff nothing but the time of day, staved off an election until (he hopes) the economy is improving and earned bonus points for looking accommodating. All Ignatieff did was rekindle doubts about his integrity, values and his political acumen. . ."

Riley's last comment was a little harsh, although she is voicing a commonly held belief which the Conservatives intend to exploit during the next campaign -- whenever it occurs. But the simple truth is that the uncivil war, which has consumed the Liberal Party for the better part of a decade, has left it unprepared to enter an election campaign. If Stephane Dion proved anything, it was that.

And, as I have written twice before in this space, the Liberals need time to reevaluate and rebuild policy. The EI Commission is a step in that direction. The problem is that last week's outcome offers cold comfort to the unemployed, whose numbers are growing.

The Prime Minister and his government will eventually fall, victims of their own carefully crafted inertia. However, as Jean Chretien reminded his party in 1990, there is a lot of work to do. It's time for the Liberal Party of Canada to stop blaming Mr. Harper and start proposing solutions, not strategy.

Still, at the end of the day, we get the politicians we deserve. Both Mr. Harper and Mr. Ignatieff know that Canadians do not want a summer election. We didn't want the one we got before last week's agreement. We bear the burden of our own neglect.