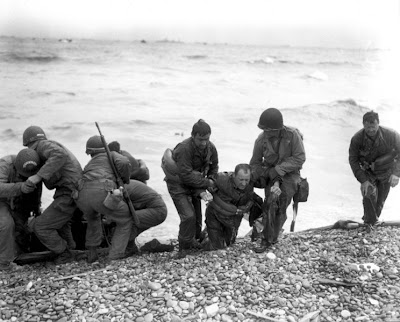 This past Saturday marked the 65th anniversary of the Invasion of Normandy. It was a long time coming; and there were those who felt that the Allied Commander, Dwight D. Eisenhower, had spent too much time cooling his heels in Britain. But Eisenhower was a shrewd judge of battlefields; and -- as later conflicts in Vietnam and the Suez Canal would prove -- when it came to going to war, he did not believe in rolling the dice. Moreover, the shear size of the operation -- 160,000 troops and 5,000 ships landed and anchored along a fifty mile stretch of French beachfront -- was staggering.

Despite the force which the allies brought to bear, they faced no easy task. The weather proved to be an obstacle; and the Germans -- who had been preparing for such an event for four years -- were ensconced in heavily fortified positions.

As Barack Obama reminded his audience this weekend, "It was unknowable then, but so much of the progress that would define the 20th century, on both sides of the Atlantic, came down to the battle for a slice of beach only six miles long and two miles wide."

It was an immense task; and it needs to be remembered by each succeeding generation. For, as Obama also told his audience, "As we face down the hardships and struggles of our time, and arrive at that hour for which we were born, we cannot help but draw strength from those moments in history when the best among us were somehow able to swallow their fears and secure a beachhead on an unforgiving shore."

It is also important to remember that "the best among us" were ordinary people -- from all over the world, from city and farm, from a plethora of backgrounds -- who worked together for a good that was more important than their own self interest.

Most of the soldiers who landed that day -- including those who did not come home -- achieved no notoriety. They have been lost to the culture of celebrity. And, as their dwindling numbers attest, there is a danger that what they did will be forgotten with their passing. We must not let that happen. For their sake and for our own.