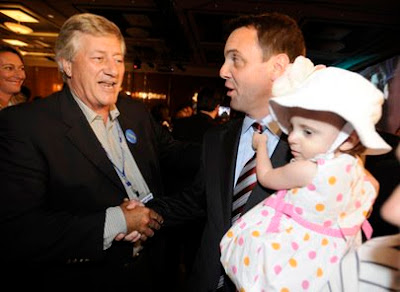 On Saturday, Tim Hudak was elected leader of the Ontario Progressive Conservative Party. Mr. Hudak entered politics at the age of 27, as a new member of Mike Harris' government. He married one of Mr. Harris' principal advisers, Deb Hutton. And, during the leadership campaign, he advocated the kind of policies Harris championed, like abolishing the Ontario Human Rights Commission.

When the party chose his successor, Ernie Eves, Harris left the building. On Saturday, he was in the front row, where -- according to The Toronto Star -- he "beamed like a proud father during his protege's victory speech." Mr. Harris certainly liked what Hudak stood for. What government needs to do, Harris said, is "to get out of the road so that the private sector can grow the jobs and the wealth we need to run the province." It all sounded remarkably stupid, given our present predicament. The Harris prescription is precisely why we are where we are. It is the reason GM and Chrysler are doing so well.

As Jeffrey Simpson wrote in a recent column, the private sector has not been a source of wisdom or innovation: "Fifteen years ago," -- when Mr. Harris was first elected -- "Nortel Networks employed 29,000 people. It was the country's high tech leader, known here and abroad. It did more research than any company in Canada. It spawned feeder companies. There were other high tech powerhouses like JDS Uniphase and Newbridge Networks. Today many of those companies have been demolished, broken up or taken over. Even Cognos, a wonderful Canadian success story, succumbed to an IBM takeover."

The Conservative prescription used to pass in the 19th Century for Liberalism. Back then, Edmund Burke's conservatism stood for community stability and government protection from wild-eyed individualism run amok. It was with The Great Depression and the New Deal that Liberalism morphed into a different creature -- a political philosophy which saw government as the banker of last resort. New Deal Liberalism gave us Unemployment Insurance, Old Age Pensions and Medicare. Twenty-first century Liberalism seeks to set people back to work, establish a green economy and slow global warming.

On that last score, American conservatives are still in denial. John Boehner -- the Republican leader in the House of Representatives -- called the climate change bill , which passed in the House last week, "a pile of shit."

Nineteenth century conservatives would never have used such inelegant language. The fact remains, however, that twenty-first century conservatives -- like Mr. Harris, Mr.Hudak and Mr. Boehner -- are stuck in the nineteenth century. For the last thirty years they have wanted to return to a simpler time -- when the rules were clear, most of the population was caucasian, women stayed home and government stayed out of the way. Like William Jennings Bryan's supporters during the Scopes Monkey Trial, they have advocated a return to "that Old Time Religion." Unfortunately for them -- and for Mr. Bryan -- we have evolved since then.
Posted by Owen Gray at 7:26 am