Learning Nothing from History 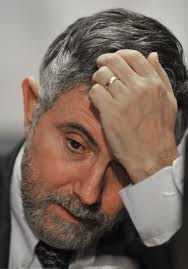 That memory came to mind on Friday, when I read Paul Krugman's column in The New York Times. On the subject of the British government's new austerity measures, Krugman wrote:

Both the new British budget announced on Wednesday and the rhetoric that accompanied the announcement might have come straight from the desk of Andrew Mellon, the Treasury Secretary who told Herbert Hoover to fight the Depression by liquidating the farmers, liquidating the workers, and driving down wages. Or if you prefer more British precedents, it echoes the Snowden budget of 1931 which tried to restore confidence but ended up deepening the economic crisis.

So too were there significant historical cautions about invading Afghanistan -- from Alexander the Great, to Great Britain, to the Soviet Union. If there is one thing that marks Western political elites, it is their appalling ignorance of history. And it is that ignorance which led Krugman to declare that:

Maybe Britain will get lucky and something will come along to rescue the economy. But the best guess is that Britain in 2011 will look like Britain in 1931, or the United States in 1937, or Japan in 1997. That is, premature fiscal austerity will lead to a renewed economic slump. As always, those who refuse to learn from the past are doomed to repeat it.

Harry Truman said, "The only thing new in the world is the history you don't know." That's why the Quebec Ministry of Education's insistence that every student take history but not pass it was so woodenheaded. I'm beginning to wonder if the same rule applied in several international jurisdictions.

And, lest Canadians begin to feel smug about their own situation, they should remember that the Harper government plans to turn off the stimulus taps in March, 2011. In fact, at last summer's G20 Conference in Toronto, the Prime Minister worked hard to get members to accept the very policy which he and Mr. Cameron plan to follow.

The lemmings are on the march.

This entry is cross posted at The Moderate Voice.
Posted by Owen Gray at 1:04 pm

Actually, I went to high school in Montreal. I was in grade 10 in the 80s and had to take the Canadian history course. My father also taught the course back then as well. If we flunked it, we actually did have to repeat it. Few notable exceptions were those going to Short Voc programs at schools like Riverdale High or (and I'm not even sure of this)those who dropped out without passing the course and then go to adult ed later to finish their high school leaving certificate.

But you're right, as Krugman says in his article, this is probably the worst political economic version of Keeping up with the Jones's.

I was going back a bit further, ck, to the 70's. They changed the rules eventually.

But, in retrospect,taking history did us no harm. And, I would argue, those who now hold the reins would have benefited from the same experience.