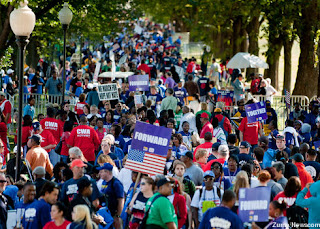 As tens of thousands of Americans gathered on the National Mall this past weekend, Frank Rich -- in the New York Times -- warned them and their supporters not to underestimate the "useful idiocy" of the Tea Party's most recent star, Christine O'Donnell. For comedians -- particularly Bill Mahar -- she is the gift which keeps on giving. But, Rich wrote:

O'Donnell is particularly needed now because most of the other Republican Tea Party standard bearers lack genuine anti-government or proletarian cred. Joe Miller and Ken Buck, the Senate candidates in Alaska and Colorado, actually are graduates of elite universities like those O'Donnell lied about attending. Rick Scott, the populist running for governor of Florida, was chief executive of a health care corporation that scooped up so many Medicare and Medicaid payments, it had to settle charges for defrauding taxpayers. Rand Paul, the scion of a congressman, is an ophthalmologist whose calls for spending restraint don't extend to his own Medicare income. Carl Paladino, the truculent man of the people of New York, grew his fortune as a developer with government handouts and favors. His California bookend, Carly Fiorina, received a golden parachute worth as much as $42 million from Hewlett-Packard, where she liquidated 20 thousand jobs.

O'Donnell, on the other hand, claims that her income for the last two years has been $5,800. That information -- like her assertion that she attended Oxford University -- may be a figment of her overactive imagination. But she is the only Tea Party candidate who appears to be lower middle class. Like the Gary Cooper character in Frank Capra's film, Meet John Doe, she is the perfect dupe for the sugar daddies -- as detailed by Jane Mayer in The New Yorker -- who are funding a pseudo populist rebellion.

The rally on the Mall was a late and desperate attempt to generate another kind of populism. Its target audience was the disenchanted progressives who are angry that health care did not include a public option and that American troops are still in Afghanistan. If they sit this election out, it's clear that -- while the change Obama has brought may not be the change they believed in -- the Republicans will ensure that there is no change at all.

Rich's colleague, Bob Herbert, wrote again on Saturday that what the country needs is real populism:

One in five American kids was living in poverty in 2009. Across the country, once solidly middle class families are lining up at food pantries and soup kitchens for groceries or a hot meal. In New York City, a startling indicator of the continuing economic crisis is the rise in the number of homes that don't have kitchens.

O'Donnell would seem to fit that profile. If, like John Doe in the Capra film, she would turn on her benefactors and explain what they stood to gain by the return of Republicans to power, she would -- despite all her other foolish statements -- gain some credibility. But don't count on it.

Despite the elaborate subterfuge, John Boehner let the cat out of the bag last Friday. "We are not," he said, "going to be any different than we've been." That statement should convince all sorts of disillusioned Democrats to go to the track and start placing their bets.

This entry is cross posted at The Moderate Voice.
Posted by Owen Gray at 2:56 am

Email ThisBlogThis!Share to TwitterShare to FacebookShare to Pinterest
Labels: The One Nation Rally

She is like many of her potential supporters ("I'm you," she says in her tv ad)- not much education, spotty work history, neurotic about sexuality, anti-intellectual, and full of slogans and religious nuttiness.

Populist she may be (or is that rather the lowest common denominator), but her fitness to be in government is highly suspect.

I know we can point to many who also aren't fit by virtue of their behaviour rather than their abilities - on both sides of the border - but she is unfit in skills, knowledge,and accomplishment. She is severely limited before she begins.

Everything about O'Donnell is anti-elite. To a large degree, it is the failure of "the best and the brightest" which is fueling voter anger on both sides of the border.

In Canada, the Harper government is trying to cast itself as the enemy of "the Toronto elites."

But when a nation consciously puts its future in the hands of the ignorant, there can be no good outcome.