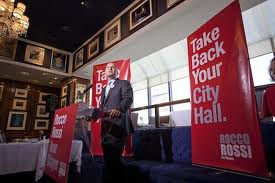 James Travers is one of the most astute political analysts in Canada. Writing in The Toronto Star on Thursday, he observed that voter anger in both Canada and the United States is fueled "more by disillusionment than by ideology." Sifting through the entrails of Ontario's municipal elections -- particularly Rob Ford's storming of Toronto's mayoral barricades -- he wrote:

Seeping north from our stricken southern neighbour is the slow realization that the great political divide is no longer between right-leaning conservatives and left-leaning liberals. What now separates elites from the madding crowd is optimism and pessimism, secure pensions and vanishing jobs and, most of all, privileged access to a system that can be so profitably gamed.

The Tea Party crowd -- and we have them north of the border, too -- is appallingly ignorant of their countries' constitutions. In the United States, Christine O'Donnell questions the separation of church and state. In Canada, a right wing rump believes we elect a Prime Minister, not a local member of the national legislature. They do not understand that, when the government loses the confidence of the house, another party or parties can assume power without an election.

Travers rightly traces a line between Pierre Elliott Trudeau's concentration of power in the office of the Prime Minister -- largely a response to the October Crisis of 1970 -- to Jean Chretien's benevolent dictatorship through to Stephen Harper's pursuit of a majority at any cost.

Lost along the way was trust in a system that, despite its many faults, could once be counted on to act in the best interest of most citizens, most of the time. Growing in the vacuum created by lies, fraud and countless broken promises is the acidic judgment that parties are guided by self interest and the powerful few who whisper in their ear.

Voters are mad as hell. They understand that the game is fixed. But, if that anger is married to ignorance, we will all be worse off than we are. Next week's election in the United States -- and the coming election in Canada -- will be more than referendums on the politics of the present. They will, indeed, be tests of the wisdom of the people. For, when all is said and done, the old saw is still true: we get the politicians we deserve.

This entry is cross posted at The Moderate Voice.
Posted by Owen Gray at 5:50 am

"Next week's election in the United States -- and the coming election in Canada -- will be more than referendums on the politics of the present. They will, indeed, be tests of the wisdom of the people."

Christine O'Donnell has gained ten points in the polls since she forced her opponent to recite the first amendment - which some say was her goal all along.

Fortunately, she is still ten points behind, but has clearly demonstrated that ignorance is preferred.

I am not hopeful; wisdom has left the building.

I'm afraid you're right, Christine. As an old teacher I have to admit that I'm disappointed.

I used to think that education offered hope for the future. But perhaps Hawthorne was right when he wrote that Hester Prynne's daughter Pearl had "learned much amiss."