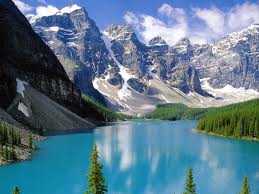 Back when I taught high school students -- it seems like such a long time ago -- I used to proclaim that, were I king, I would make a cross Canada trip a mandatory part of the high school curriculum.

Before they graduated, I wanted every student to see the tide recede and roll back into the Bay of Fundy. I wanted every one of them to stop at a lookout on Mount Royal and look down on the lights of Montreal. They would have had to spend another night on the banks of the French River in Ontario, and watch the sky open up, as they left the Lake of the Woods and headed for Winnipeg. And, most of all, they would have traveled from Banff to Jasper, surrounded on both sides by those mountains.

That would never happen, of course, particularly in these times of austerity. But it could probably be done for the cost of a few F35's or a couple of prisons. The point is that it's a matter of priorities. And, despite all the flag waving, the Harper government's priorities are elsewhere.

Stephen Harper proclaims that I won't recognize Canada when he's through with it. I continue to cling to the belief that anyone who is deeply familiar with the Canadian landscape knows that he or she is very small in the grand scheme of things.

And I continue to hope that Canadians will see Stephen Harper for who he is -- a very small man.
Posted by Owen Gray at 8:17 am

I used to have the very same fantasy.

Happy Canada Day, Owen! Some links to celebrate just one massive corner of this land:

The Summer solstice in Dawson City:

Eagle Plains and the Arctic Circle:

Thanks for the links, Bejing. What a magnificent country!

That there picture is one I well remember from my boyhood days and into my adulthood. That is the valley of the ten peaks or also known as Moraine Lake, a very beautiful and peaceful place.

When you sit above the shore and stare into the beautiful multi-hued azure/copper-green waters that words don't do justice to....

You feel tranquil and very happy to be alive on that day...

I miss being there...

Q: Why is everything Stevie is doing has to be done in SECRET?

A: Like any good vampire he will wilt in the light of day!

Stevie is running out of darkness, the light is gonna melt him>soon.

I wish I was on the shores of Moraine now....

Harper doesn't value our, lakes, rivers, streams, land, clean air, nor the sea. Harper is so rabid and obsessed by oil, he has no logistics, what-so-ever. Harper has lost his reason, he is an absolute fanatic.

Canada has become, a cesspool of corruption, since Harper and his so called, very dubious majority. Harper is very weird, getting worse every day.

For the first time in years, I am not going downtown to watch the July 1st, Canada day parade.

My wife and I and two of our three sons were there thirty years ago, Mogs. Son number three was just a glint in his mother's eye.

There's no place like it on earth. That's because the colour of the lake is like no other lake on earth.

What Stevie is trying to do is make us more like our southern neighbours. He'll only accomplish that goal if we allow him to do it in the dark.

That's sad, Anon. We need to remember -- especially on Canada Day -- that ordinary Canadians are better than their prime minister.

Here's how it works:

- Grade 12 grads will do a circuit of Canada by car.
- Leave their home on July 2 in the year of their graduation
- Return to their home the week before Labour Day
- Total time on the road is about 8 weeks
- The circuit MUST include all 3 oceans and no road can be traveled twice

The real challenge is to design a route that honours Canada's geography, history and people.

Excellent suggestion, Anon. Let's see if there are any takers.

You're dreaming, Mr. Gray, and so are your readers. A two-month tour of Canada for all graduating highschool students, and on the public purse yet? Even Pierre Trudeau couldn't pull that off. Pull your heads out of the sand, stop acting like cry babies, and do something useful. Who is it who's picking up his or her marbles and going home this year, instead of celebrating Canada Day? No wonder Stephen Harper's our Prime Minister!

You are lucky to have been at the valley of the ten peaks, so am I!

Now under Steve's iron fist'ed rule it may become a tailing pond.....

You win my vote as being the most serious spiced with humor blog in the country, uh aha tied with a few more for my reading delicacy:

"Top picture was taken in Alberta, I guess along time ago. Today that same scene would be covered in black Alberta bitumen en-route to the red chinese war machine, compliments of herr harper the red dictator of Canada."

TO TOP IT OFF:

This person does their research:

And in the east:

Let's shine some light on the harper vampire regime?

Owen I owe you for being fun to read and right on eh?

I hope you love the links too!

Stephen sold it out

"Mogs. Son number three was just a glint in his mother's eye."

To do a literary correction Owen:

Mogs. Son number three was just a glint in his mother's and father's eye.

And that's the problem, Anon. If it's just another holiday, Stephen Harper will be prime minister for a long time.

And if we're content to simply see issues from narrow regional perspectives, he'll continue to divide and conquer.

Keep them in the dark and keep stoking their prejudices. It's a recipe for political success.

It was a team effort.