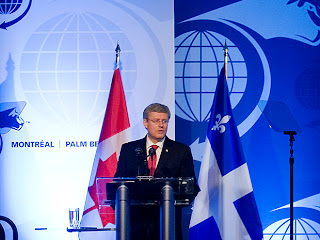 Yesterday, in Montreal, the world got a chance to see the Stephen Harper Canadians have come to know so well -- a man who is, above all else, full of himself. More and more, he is adopting the American rhetoric of the City on the Hill -- only that city, says Harper, is Canada.

“The Canadian approach is what the world needs,” said Harper.


What is truly annoying about Harper is how he takes credit for the accomplishments of others. For the last four years he has taken credit for the solvency of Canadian banks, which owe their good fortune to the Martin government. During the election campaign, he plastered the country with signs touting "Canada's Economic Action Plan" -- which was forced on him by what he called a "separatist coalition."

Now he claims that austerity -- the very thing which got Europe in trouble -- is what Canada and the world needs. At the same time, he blames Europe for making a mess of things. But he has others deliver the barbs. The latest came from eager acolyte Pierre Poilevere, who -- three days ago -- waged his finger at the Europeans:

"They have taxed to the max, borrowed to the brink and are seeking a bailout to continue spending what they do not have," said the Ottawa-area MP, known for his hyper-partisanship.

"This prime minister will not force hard-working Canadian taxpayers to bail out sumptuous euro welfare-state countries and the wealthy bankers that lend to them."


Yes, that's our Stephen -- full of himself. One suspects the Europeans believe he is full of something else.

Unfortunately, Sassy, Mr. Harper has convinced a significant number of Canadians that he has a superb mind.

You took the words right out of my keyboard. Harper is certainly full of something besides him self. There is room for one more thing in Harper, however, it isn't printable.

We all know, who saved our Canadian bacon during this recession, it sure in the hell wasn't Harper. Harper is the worst money manager, in the recorded history of this country.

Other country's call Harper, a petty gasbag, arrogant, stubborn, impossible to work with, and co-operates with no-one. At every meetings of Nations, Harper is the trouble maker every time. Durban, Davos, and Copenhagen for three.

Now Harper has, merged Canada into Communist China. China has hacked into other country's secret files. Seems, it is a very sad mistake, to buy electronic components from Communist China. Even the Chinese people hate Communist China. The U.S. claims to be worried, about the security of their country.

Communist China, controls Canada's resources and Harper. Never would I have ever thought...Canada would be taken over by, Communist China.

I remember Harper threatening Obama. If he dragged his feet on the Keystone pipeline, he would give the dirty tar oil to Communist China. Maybe not so strange...Harper hates everything Canadian, including the people. I guess all Communists do.

Harper's no communist. But he has no problem doing business with communists.

And he has no problem taking credit for things he didn't do.

Full of himself as all despots are and perhaps now in the face of public backlash over his over the edge policies he will become a desperate and unfortunately dangerous despot.

I hang my head and wonder what next?

Austerity has proven to line the pockets of the 1%, look at the food crisis in Nunavut $8 for a loaf of bread and $18 for a 2 liter jug of OJ all because of Harper's policy. Where is the humanity in all of this?

It's come down to the bottom line and that's all folks, profit for pleasure for the 1% the rest of us be damned. Welcome to Harper's Hellhole:(

In Harper's world, Mogs, everything -- and everyone -- can be bought and sold.

And shut down at will are we next?

If he can arrange it, I've no doubt he'll try, Mogs. The omnibus bill is proof that what he'll tell you and what he'll do are entirely different animals.

Lectures to Europeans, billions spent on jet fighters, military bases around the globe, unconditional support for Israel, wars of liberation - is Mr. Harper looking for a seat at the table with the world's great military powers? He's a flea with an erection, paddling down a great river on his back while yelling, "Open the drawbridges!" It's embarrassing.

How patient the international community is. Long ago, I would have stood up in response to Harper's arrogant. "We are better than you and you need to emulate us," approach with a F*** O**, if you have nothing constructive to offer keep you self congratulatory comments to yourself.

I suspect lots of folks are mumbling your response under their breaths, Phillip.

Such men are dangerous.