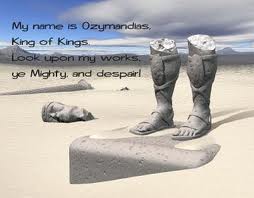 In her comment on one of Susan Riley's recent columns in The Ottawa Citizen, Cathleen Kneen writes:

There is a clear pattern here, from proroguing Parliament to the omnibus "budget" bill which (among much else) guts the country's environmental protection, the purpose of the Conservative government is to undermine and where possible to eliminate the capacity of the citizens of Canada to meaningfully affect the workings of the state.

I'm not sure what you call the resulting system, but "democracy" does not spring to mind.

But Harper's ambitions go well beyond establishing iron fisted rule at home. He believes that his kind of power needs to be projected around the world. That is why his government seeks to establish seven military bases abroad, from Africa to Singapore to the Caribbean to Kuwait. Tom Walkom writes that:

Steven Staples, a military analyst and head of Ottawa’s Rideau Institute, calls the entire idea a waste of money.

“The notion that we’re going to have permanent bases around the world is over the top. I don’t understand the rationale for parking a bunch of equipment in Singapore in case we might need it some time. That’s why we bought C-17s in the first place — so we could move troops and material quickly.”


The hypocrisy of the plan -- as Harper shoves austerity down Canadian throats -- should surprise no one. But Walkom sees a darker purpose behind these plans:


My analysis is darker. I fear the government is deliberate in its madness. I think it is setting up foreign military bases because it fully expects to have Canadian troops fight alongside the U.S. or NATO in more Afghanistan-style wars.

I think it has learned nothing from the past 10 years.

But look who is pushing the idea. A nut-job like harper.

It's all cut from the same piece of cloth, isn't it thwap? Nothing surprises anymore.

When it comes to the military it seems the Conservative government has one grand scheme after another to spend unlimited resources on.
How about those wonderful bargain basement submarines we are still patching up and praying the sailors do not lose their lives in just testing them. On yes, there are the expensive jets. Sexy but not the right one's to meet our needs or our pocket books. Even the Americains are worrying about the costs. How about those northern Canada military bases to defend our Arctic. No progress there. And now we are to have 7 "bases" near hot spots around the world. There was to be a year round Arctic deep water port if I recall. With the US having more than 700 bases around the world our strategic warehouses look feeble. We should have at least 70 to represent out population as 10% of the US.

Harper and company must dream these things up at night to feelings of power and grandeur.

I would be thilled if they returned the search and rescue group to St. Johns and added another one in Northern Labrador and one or two more in the far North.

We are getting some new vessels being built. ( trust we have the money to pay for them for they seem necessary.)

I remember when North Bay was considered the Far North. The military that is still here manning the NORAD site in tiny. We do have an underused runway large enough for the largest planes in the World. (Occasionally, the Russian one has made a landing here). Like Gander, North Bay has become a military rump of a place as visions of bases is distant lands are dreamed up. With a military that cannot put more than 2 or 3 thousand fighting men and women on the ground at a time, what are we dreaming of!!!

You're right, Phillip. Someone is dreaming. It seems to me that the people who have been there may have nightmares, but not dreams of grandeur.

Only those who have not been engage in such fantasies.

Surely everyone must remember Harper's posturing? He will kick Russia's butt, if they threaten Canada's territory of the High Arctic? I do believe, Harper was called a petty gasbag, by another country, for that foolish statement.

Can you see Canada fighting Russia's nuclear subs? Their state of the art ships, and their fighter jets? Well, I can't see it. Harper stupidly wasted a fortune, on the ancient subs, he bought from England. They aren't even seaworthy. The F-35 jets, have so many glitches wrong with them...I doubt the will be ready, for the next century.

Russia is amassing ships and jets, in their far north. Russia will take that territory, if they really think it's theirs. Same as China taking the small island in the Philippines, if they really insist the island is theirs.

Russia, China and Syria are allies. China has been building up, their war machinery. Russia already has a formidable military. Canada's best role, is that of a peacekeeping country. Canada was welcomed, all around the world. Harper has destroyed that trust for Canada. We more than resent him for that.

But something tells me that he is not familiar with most of what Mark Twain wrote.