The Road To Fascism 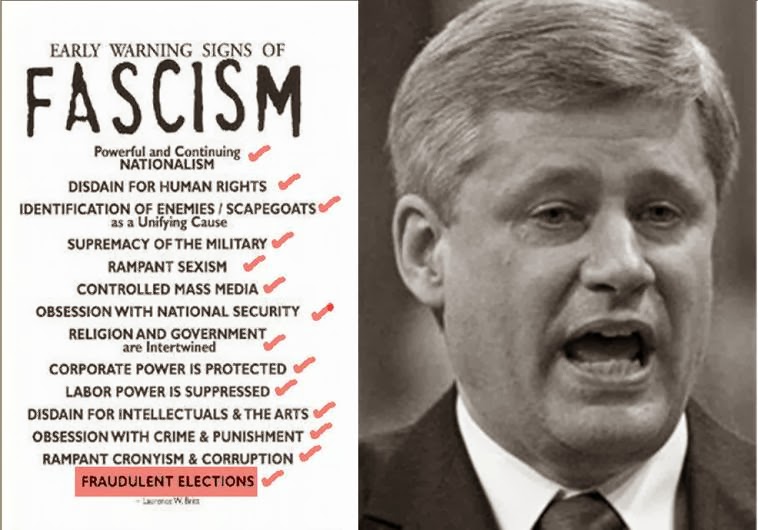 The Harper government has ordered the Canada Revenue Agency to carefully audit the books of organizations opposed to pipelines. Murray Dobbins correctly wonders if big oil has subverted Canadian democracy. But the government's use of the tax man to get at its enemies is not Dobbins' biggest worry. The more frightening development is Stephen Harper's use of the security establishment to monitor Canadians:

Harper's general list of assaults, as bad as they are (and columnist Lawrence Martin has compiled a pretty thorough one here), is different from our prime minister's genuinely frightening decision to enlist the country's security apparatus in the direct and immediate service of the oil industry. Nothing like this has ever happened before in Canada.

Mr. Harper is not the first prime minister to spy on Canadians. But his use of this country's security infrastructure goes far beyond anything Canadians have seen before:

Paranoid governments in the past have used the RCMP and CSIS to spy on political enemies, infiltrate activist organizations and have even sent in agent provocateurs to tarnish the image of political protest. But to arrange to have intelligence and police agencies, government representatives, a government agency supposedly responsible to Parliament and the Canadian people (the NEB) and corporate executives all sit around a table to explicitly violate not only our democratic rights but the law of the land is a grotesque step beyond.


The prime minister's use of the security establishment to pursue corporate ends confirms that he truly is a corporatist tool. He has set us on the path to fascism -- which Mussolini defined as the "merger of state and corporate power."

Email ThisBlogThis!Share to TwitterShare to FacebookShare to Pinterest
Labels: Harper and Big Oil

Astounding, isn't it, Owen, that we should live to see the day when this has happened? But I guess a democracy is only as strong as its participants, and until more Canadians rouse themselves from their perpetual apathy (I seem to be repeating myself these days)we can only expect more of the same.

Our democracy is always ours to lose, Lorne. There's always someone willing to destroy it.

We have known since 2002, Harper is a Neo-Nazi. The Canadian Nazis donated to Harper's Alliance. There is also. Harper was Policy Chief for his, Northern Foundation of 1989. There are books written on that subject.There was, Wolfgang Droege and his Heritage Front.

However, trying to get through to people is an, exercise in futility.

So, some Canadians are going to get, exactly what they wish for.

One hopes those people are in a minority, Anon. One hopes the majority will send Harper packing. It's time he left Ottawa.

If any of this surprises anyone, they haven't had a good look at oil can stevie. The Cons have been working on changing Canada into a neo Nazi state from day one. He has gone about it slowly but surly. He is now in his final stages, with his changes to the elections act. We will be lucky if we have any fair elections in the future. it is oil can stevie's intent to have him and his and china run this country until there is nothing left.

If people don't get active to change the government we will have what we deserve and no one will be able to say they didn't know. You simply have to look at how oil can stevie has treated First Nations. So why would anyone be surprised about how he treated Veterans and those serving the military now who have developed mental health issues. It could be concluded oil can stevie has no use for those who do not meet his standards. sort of like hitler and putin.

You're right, e.a.f. Harper has been working to establish a fascist state from the beginning. Many may not have recognized what he was doing, because he went about his project incrementally.

But the so called "Fair" Elections Act should be a wake up call for everyone.