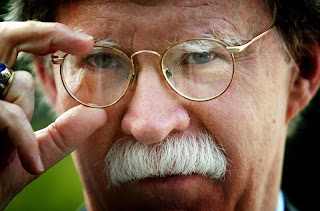 John Bolton, the former American Ambassador to the United Nations, once quipped that:

There's no such thing as the United Nations. If the U.N. secretary building in New York lost 10 stories, it wouldn't make a bit of difference.


And for that bit of folderol, George Bush sent him there. John Baird, whose name will live in infamy at the UN, has another way of putting it:

But it is a phrase -- which Baird only adopted after Canada lost its bid  for a seat on the Security Council. It was only then that "the Harper government" discovered that giving the world a middle finger salute has consequences. They then retreated the the defence that they stood on principle. But the world had figured out early that the Harper regime stood for profit, not principle.

So, Mr.Baird declared yesterday that Canada would not stand for a Security Council seat this year. Why be embarrassed yet again? Why be exposed -- again -- as the hypocrites they are?

One wonders if Baird calls Bolton for advice.