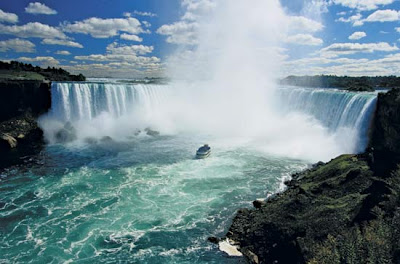 My wife, our youngest son and I spent last Friday at Niagara Falls. Our son's science course this year focused on the environment. One of the phenomena he studied was erosion by wind, water and ice. There is no better example of water erosion than Niagara. But having never seen the Falls, our son needed to experience them. So we decided to rectify that oversight.

I have seen the Falls several times -- but always from above or from the caves underneath. However, this was the first time any of us had stood on the deck of one of the several Maids of the Mist. Without a doubt, the Falls are most impressive from below. The sheer amount of water, the roar it creates and the mist and spray which rise in the air, like the steam from some gigantic boiling cauldron, inspire both fear and reverence.

But more than that, when one stops to consider that water from four of the Great Lakes tumbles over the gorge into Lake Ontario and then down the St. Lawrence to the Atlantic -- where it joins the ocean currents constantly circulating in a system which gives us rain in the summer, snow in the winter and life forever in renewal -- one can only pause in admiration.

Niagara is a natural monument to our interconnectedness. It reminds us that, in an age of muscular individualism -- which operates on the principle that Individual Choice is the prime directive -- all of our choices have consequences -- not just for us as individuals, but for all of humanity and for the planet we like to think we own.

One cannot walk the streets of Niagara Falls, Ontario without encountering the planet in miniature. After our ride on The Maid, my wife and son let me park myself on a tree-shaded bench, because my arthritic knees cannot now take the punishment which I once dealt them. While my wife and son went in search of souvenirs, I sat and looked ahead to the American Falls. I found myself at a small convention for Those Whose Knees Are Not What They Once Were. A woman from Colorado sat down beside me. Her family, too, was in search of trophies to take home to Denver. We were joined by a retired cardiologist from Toronto, who trained in Montreal, moved to Houston, but moved back to Ontario to retire. When his family came by and picked him up, a family originally from central China, then Los Angeles and Vancouver, sat down on the bench. This was their first trip to the Falls. Throughout their travels, they said, they had not encountered anything like them.

And there is nothing like them. The world beats a path to Niagara; and Niagara serves to show us the path to wisdom. It reminds us that we are all in this together; and the solutions to whatever problems we face now require international cooperation. We are not alone.
Posted by Owen Gray at 9:49 am

Email ThisBlogThis!Share to TwitterShare to FacebookShare to Pinterest
Labels: Niagara