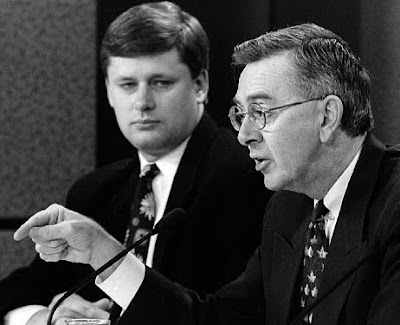 This week, the Harper government began walking two more civil servants -- Veterans Ombudsman Col. Pat Stogran and RCMP Chief Superintendent Marty Cheliak -- to the exits. Both men were charged with holding the government accountable for its actions -- something Mr. Harper claimed he and his party stood for, without exception.

But that was before Mr. Harper became Prime Minister. Now Stogran and Cheliak join a long list of people who were fired or let go because they did their jobs. Meanwhile, Mr. Harper has retreated to his bunker, staying out of the limelight, while other ministers -- like Tony Clement and Stockwell Day -- take the heat for his decisions.

What is interesting is that this is nothing new. In his book, Think Big: My Adventures in Life and Democracy, Preston Manning recounts how Stephen Harper simply had a hard time working with others. Manning writes, for instance, of how Harper objected to the appointment of Rick Anderson as the Reform Party's campaign director. Anderson had supported the Charlottetown Accord; and Harper simply didn't trust him. But it went beyond that. Anderson was Harper's intellectual equal. And, Manning wrote, Harper

had difficulty accepting that there might be a few other people (not many, perhaps, but a few) who were as smart as he was with respect to policy and strategy. And Stephen, at this point, was really not prepared to be a team player or team builder.

Mr. Harper has never been one to work collaboratively. Manning recounts how, in 1992, he quit as the party's Chief Policy Officer to concentrate on his own election campaign. This was "a blow to our overall campaign effort, and it put more of a burden on those who had to fill the gap left by his withdrawal." Despite his desertion, Harper was one of 52 Reformers elected to Parliament in 1993.

But, as another election approached in 1996, he began to fear that the team, which he had done so little to build, was going to lose:

Rather than pitching in to help turn things around [Manning wrote] Stephen again chose to withdraw. This was now the third time that Stephen had vacated the field prior to a battle -- the first time when he retreated from our Charlottetown Accord campaign, the second time when he withdrew from the 1993 national election campaign to concentrate solely on his own riding.

And six months prior to the election, Harper resigned his seat and went back to Calgary, to become the head of the National Citizens Coalition, where the only other person who worked in the organization's office was his secretary.

Those who know Stephen Harper best -- those who have worked with him from the beginning -- long ago reached the conclusion which Andrew Coyne voiced this week in the pages of Macleans:

And the Prime Minister? Consider how his image has changed over the years. Once he was viewed as rigid, but upright; doctrinaire, but with a certain integrity. Over time that gave way to a more Machiavellian cast. Perhaps it was true, it was said, that he would do anything and say anything to hold on to power, but you had to admire his cunning.

But now? After so many miscues, unforced errors, too clever tricks and utter botch ups, does anyone still cling to the "strategic genius" view of Stephen Harper?

Holden Caulfield had a simpler, more direct phrase to describe people like the Prime Minister. He is, to put it plainly, a "phony."
Posted by Owen Gray at 7:06 am

What you failed to mention is that Preston Manning was not only critical of Prime Minister Harper in "Think Big: Adventures in Life and Democracy", but equally as much of Stockwell Day. And you didn't mention that he was especially cruel to Jean Chretien.

It's possible, of course, to interpret the youthful actions of our Prime Minister (as described by Mister Manning) as having been rooted in petulance, or selfishness, or inflexibility, or of something worse - as you happily reported.

However, there's at least one other way to consider his apparently selfish actions as he and his party rose from the ashes of the old Conservative party to assume leadership of the nation.

Neither Misters Manning nor Day came anywhere close to power. Canadians saw them as little more than laughing stocks, straw men. They never amounted to more than a minor annoyance to the Liberals.

Both men failed to see what the young Mister Harper easily saw: that the Right must be amalgamated if it was to have a chance of loosening the Liberal strangle hold on our country. It was an early display of the imagination and courage of our Prime Minister that he was willing to battle both the Conservative and Reform establishments in rejecting the worn-out methods which gave free rein to rampant Liberal corruption!

Nobody on the Left has his qualities of unselfish leadership and genius. If there were such a person, he or she, risking their political future for the sake of the nation, would have emulated Mister Harper and begun to unify the Left.

Our Prime Minister is no phony.

I do not hold up Manning -- who tends to be self righteous -- as a paragon of virtue. I'm simply suggesting that Manning saw through Harper's casual blue sweater.

He understood that Harper was in politics primarily for himself, not for his party. If Harper saw that the Right had to be united, he also decided that such a union would only happen if he -- not Peter Mackay -- took home all the marbles.

As for Harper's courage, it takes courage to seek out opposing views. On that score, Belinda Stronach deserves the last word: "He surrounds himself with like-minded people and doesn't want input from others who have a different viewpoint."(http://www.theglobeandmail.com/archives/article809018.ece)

It takes no courage to bask in the admiration of the like- minded. It does, however, take courage to seek out "strangers in a strange land."

I read Coyne's article a few days ago, with some interest. I'm not sure that he would agree that Harper is "a phony." My impression is that, at least from Coyne's point of view, Harper has changed. Though perhaps he has changed into a genuine "phony"? Or perhaps I should read the article again... He [Harper] certainly does seem "Machiavellian"--a term which does little justice to Machiavelli himself.

Dear fellow Anonymous: I was struck by a few of things you wrote.


Second: "Both men [Manning and Day] failed to see what the young Mister Harper easily saw: that the Right must be amalgamated if it was to have a chance of loosening the Liberal strangle hold on our country."

Can "uniting the right" be considered Harper's idea? I'm not sure how much imagination it would take to unite the two right-of-centre parties that together garnered as much of the popular victorious liberals during the 1997 election.

I thought Manning was, at least in many ways, behind the "unite the right" movement... He didn't have to step down as leader of the Reform Party and run for leader of the "Canadian Alliance" in a race which he lost to Stockwell Day [who must have known what the "alliance" was all about]... and a race in which Stephen Harper did not run.

Third: "Neither Misters Manning nor Day came anywhere close to power. Canadians saw them as little more than laughing stocks, straw men. They never amounted to more than a minor annoyance to the Liberals."

I disagree. I think that Stockwell Day was Chretien's dream-come-true, just as Sarah Palin as a Republican nominee for president would be a Democratic nominee's dream-come-true. (Perhaps a less hypothetical example could be found in the up-coming Senate race between Harry Reid and Sharron Angle in the USA).

The formation of an "Alliance" was an attempt to build a big tent party. The Unite the Right initiative submerged the old PC Party under Reform Party leadership.

That is why people like Joe Clark and Elsie Wayne felt there was no place for them in the new "Conservative Party."

As Coyne correctly asserts, that "new" party is essentially a "know nothing" party, which -- in the end -- stands for willful ignorance.

Quite true -- which means we need a much more effective opposition. How could such a change come about?

Who's who in Whoville?

Perhaps Harper didn't "collaborate" with the old "party" either becasuse he didn't agree with either the substance of policy or the efficacy of the strategy and chose to let others fall on their own swords.

Considering that, and moving forward many successful years from a political standpoint, he'll be judged fairly well in comparison to some of his critics.

However, is he a phony or just destined to be a victim of the inevitable churn of leaders that will fall prey to their specific blend of principles versus pragmatism.

I'd argue the Canadian political and constitutional system (and its roots) guarantee predefined "shelf lives" of our leaders due to the paralysis of bringing about meaningful (legal and social)systemic change that resonates with enough individuals.

Additionally the human natured time-honoured "public-bashing" based on agendas, idealogies, and ignorance guarantees failure at some point, especially in this information age.

Considering these forces I'd surround myself with like minded individuals to try and achive my goals and ignore inferior strategists and policy makers as well unless they can add meaningful fodder to the (really short) time alloted to achieving one's goals.

I agree, Anon, that all governments have a shelf life. Harper is aware of that. That's why he operates through omnibus bills. He wants to get as much of his agenda accomplished as he can before his time runs out.

But I'm also sure that he is a phoney -- as the senate scandal makes clear.

The sooner the public catches on, the less time he will have.