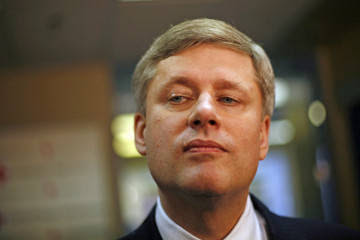 "A democracy which refuses to heed the will of the majority as routinely as it embraces the narrow interests of a vocal fringe," Alec Bruce wrote in the Times and Transcript this week, "is no democracy at all; it is, by ambition and practice, an elected oligarchy."

In the face of opposition from over 200 organizations, the Harperites can only point to three organizations -- the Fraser Institute, the Canadian Taxpayers Federation and The National Citizens Coalition -- which support their decision to abandon the long census form. No matter, wrote Bruce,

Prime Minister Stephen Harper and his cabinet have, for years, waged a stunningly successful campaign against the twin concepts of expertise and collaboration in political culture. Their hard line right wing mentality has extolled the virtue of certitude in all matters of state, as bias and presumption have proscribed the meritorious, once meretricious, qualifications for public office. Meanwhile, reasonable dissent has become the province of eggheads, elitists and other assorted traitors.

Add to that the confirmation -- contained in emails from Statistics Canada -- that the agency never supported the government's decision to abandon the long form -- as Tony Clement claimed -- and you have a tipping point.

"Canadians witnessed the disgusting spectacle," Jeffrey Simpson wrote in The Globe and Mail

of careerist ministers -- Industry's Tony Clement in the lead -- tap dancing to the Prime Minister's tune. Their justification for dispensing with the long form -- the best chance of getting the most accurate data -- was a melange of distortions, misrepresentations and exaggerations of so gross a kind that Canadians recoiled in indignation.

The history of the Harper government has been a series of blunders -- from sabotaging his chance at majority rule by making intemperate comments about cultural organizations, and thus alienating Quebec supporters -- to attempting to eliminate funding for opposition parties six weeks after that election and proroguing Parliament to avoid a vote of confidence -- to proroguing Parliament yet again this year when questions about how Afghan prisoners were handled by Canadian authorities made it too hot in the parliamentary kitchen. Each blunder has been an over reach -- an attempt by an oligarchical prime minister to have his way and answer to no one.

The census decision is yet another example of Harper's insistence that he does what he does because he can. Only this time it's clear that, in spinning the rationale for the decision, he and his ministers have simply not told the truth. And the public understands that destroying Statscan's data base will make it easier for them to not tell the truth.

Jeffrey Simpson is right on target: "The long form will return. Voters won't."
Posted by Owen Gray at 5:47 pm

Email ThisBlogThis!Share to TwitterShare to FacebookShare to Pinterest
Labels: The Census Debacle

Our government is, quite literally, an oligarchy. Our "democracy" is such that a government need not obey the will of the majority. The will of less-than-40% (as decided during the previous election) will do.

As for whether or not the voters will return... I'm not sure. The Conservatives' support has been fairly stable. The overall voting rate has been going down steadily in Canada--a phenomenon that tends to benefit the right. All of Harper's missteps do much to distinguish him from the opposition, and tends to make the opposition parties indistinguishable (policy-wise).

He needs a constitutionally sanctioned majority government, which he can achieve without anything close to the majority of the population supporting him.

And remember what one of his candidates' promises before a November 9th by-election: "de l'action, pas d'elections."

I take your point that a majority government in Canada does not require the support of anything like 51% of the votes cast.

If voters see Harper as someone whose lies exemplify his contempt for them, they'll send him back to Calgary, where he can return to his job as head of the National Citizens Coalition.

To overcome the loyal support Mister Harper has enjoyed from the Christian Right and social conservatives, one or both of two things must happen.

Either the Liberals must find themselves a stronger leader (with a compelling vision for Canada's future) who can attract more support from the political Left; or, as Mr. Chretien suggested,parties on the Left must join forces to form a government more to the liking of Canadians. Polls suggest the support might be there.

Until something like that happens, there'll be no "tipping points".

Whether we like it or not, we are used to government duplicity; we expect it; it's no longer a big deal. The opposition understands that.

Already, they are reaching an accommodation with Mister Harper about the census.

I agree with you that, under Mr. Ignatieff, the best the Liberals can hope for is a minority.

A Liberal-NDP coalition could be good for the country. Such a coalition would bolster John Ralston Saul's argument that we are a "Metis Nation" which negotiates solutions to problems.

It's pretty clear that Mr. Harper does not intend to negotiate with anyone.

The "Liberal" party in BC is as bad. MLA John Rustad and many commenters on his blog (in response to the HST debacle) believe that when the people disagree with the gov't, well that's just plain wrong and democracy should be ignored. It's quite appalling.

Harper is no different.

I'm sounding like a broken record - the federal Liberals won't win with Iggy as leader.

I also like the idea of Liberal/NDP coalition government.

I, too, occasionally think that -- at least when it comes to the Conservatives -- my message is always the same.

But there is a consistent pattern there. Mr. Harper is dedicated to changing the fundamental nature of Canada.

Unless Mr. Ignatieff and Mr. Layton work together, we will lose the best part of ourselves.