The Party of the Paranoid 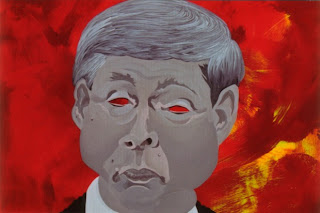 Errol Mendes raised hackles on the right two days ago when -- in a column in the Ottawa Citizen -- he wrote that Stephen Harper's war against the public service increasingly makes his government look like a dictatorship. "It is primarily in totalitarian regimes," Mendes wrote,

that there is little use for an independent public service, or judicial or quasi-judicial bodies that seek to promote the public interest regardless of politics. The undermining of the public service of Canada should be one of the most important ballot box issues in the coming federal election.

What prompted Mendes column was the resignation of Munir Sheikh, the Chief Statistician at Statistics Canada. Sheikh joined a growing list of public servants who Mr. Harper either fired or replaced, because they did not bow appropriately before the throne. Among the departed were:

Peter Tinley of the Military Complaints Commission, Linda Keen of the Nuclear Safety Commission, Paul Kennedy of the RCMP Public Complaints Commission, Adrian Measner of the Wheat Board, John Reid and Robert Marleau of the Information Commissioner's Office, Bernard Shapiro, the former ethics commissioner, Marc Mayrand, chief electoral officer of Canada, and, of course, at the front of the firing line is Kevin Page of the Parliamentary Budget Office.

Harper's suspicion of the public service has become pathological. That became absolutely clear, later in the week when Stockwell Day brushed aside suggestions that the new prisons the government says are a priority are not required, because the crime rate in Canada has been dropping for ten years. Those numbers, said Day, were not to be believed. The real problem is unreported crimes. In 1993, 42% of victims reported crimes. In 2004, 34% reported crimes."Those numbers are alarming," Day said, "and it shows how we can't take a liberal view of crime [or] suggest that it's barely happening at all." The numbers are vague. But the bogeyman gets bigger.

Day did not indicate how the government would find these unreported criminals. So the question of how those empty cells will be filled remains unanswered. It is worth remembering that Day's cabinet colleague, Jim Flaherty -- when he ran for the leadership of the Ontario Conservative Party -- suggested that the homeless should be swept off the streets and put in jail for their own protection.

It is also worth remembering that the driving force behind Harper's Conservatives are left overs from Mike Harris' Common Sense Revolution. Lawrence Martin wrote last week in The Globe and Mail, that the Harris stamp on policy is best symbolized by Harper's replacement of Ian Brodie with Guy Giorno, Harris' right hand man. "The changeover," Martin wrote, "may come to be seen as the turning point in Mr. Harper's governance, the moment when the die was cast, when the chance of these Conservatives ever becoming a big tent party ended."

Giorno's ascent marked the point where paranoia became the prime directive in the Prime Minister's Office. One need look no further than the police response at the recent G20 summit. It is no accident that the government's response bears striking similarities to the Ipperwash Confrontation, where Mr. Harris allegedly told the Ontario Provincial Police that he "wanted the [expletive deleted] Indians out of the park."

Americans learned during Richard Nixon's presidency that paranoia in power can shake the foundations of a democracy. A word to the wise.
Posted by Owen Gray at 7:49 am