Arizona on My Mind 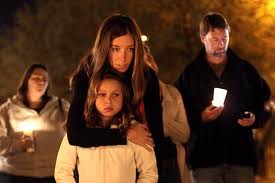 The tragedy in Arizona this weekend has generated an ocean of comment on both sides of the border. In The New York Times, Paul Krugman wrote:

Where's that toxic rhetoric coming from? Let's not make a false pretense of balance: it's coming overwhelmingly from the right. It's hard to imagine a Democratic member of Congress urging constituents to be "armed and dangerous" without being ostracized; but Representative Michelle Bachmann, who did just that, is a rising star in the GOP.

In The Toronto Star, James Travers saw plenty of blame to go around: "In Ottawa as in Washington, the result is that abuse is now the common tongue of policy debate. Invective and vitriol are heaped on those who reach different conclusions."

Yesterday, Rush Limbaugh attacked Sheriff Clarence Dupnick for fanning a left wing conspiracy aimed at shutting down free speech. And Sarah Palin's spokeswoman -- not Palin herself -- suggested that the cross hairs on her electoral map were meant to be taken metaphorically, not literally. Both pundits deny any responsibility for what happened. And they are both right. Neither is legally culpable. The man with the gun is in custody.

But what both Limbaugh and Palin appear absolutely ignorant of is the truth which Abraham Lincoln felt in his very bone marrow -- that words can be used as weapons; and that democracy works best when citizens are guided by their "better angels." He stuck to that conviction throughout the Civil War. He said it best at his second inaugural:

With malice toward none; with charity toward all; with firmness in the right, as God gives us to see the right, let us strive to finish the work we are in; to bind up the nation's wounds; to care for him who has done the battle, and for his widow and his orphan -- to do all which may achieve and cherish a just and lasting peace, among ourselves and with all nations.

It's worth remembering that when invoking the name of the Creator, Lincoln never claimed that God was on his side. He did, however, hope that he was on God's side. We suffer from the delusion that we are the instruments of righteousness. Certainly Limbaugh and Palin suffer from that disease. We need to find an antidote. We could start by practising a bit of humility.

This entry is cross posted at The Moderate Voice.
Posted by Owen Gray at 7:40 am

Nonetheless, there is nothing in this tragedy which gives me any comfort.

With respect to your comment, Mister Gray, there's nothing about the shootings, considered in isolation, which gives me comfort either. But let's not be overly despondent about what is certainly a sad incident. There is a bright spot.

The reaction to the shootings suggests Americans have at least paused to wonder if their country is becoming another Afghanistan, a place where attempted political assassinations are common and citizens walk about armed to the teeth.

While I doubt most Americans have the political will to change how they live and think, the evidence that some of them may at least wish they could change is encouraging.

Your optimism is encouraging, Zero. It suggests that we can all listen to our better angels.

I must say, however, that Sarah Palin's recent reference to "blood libel" -- the context of which I'll bet she doesn't know -- is discouraging.

Real progress will be made when she stops laughing all the way to the bank.

Welcome back. I've missed your clear and precise observations.

The right wing media, politicians, the Palin apologists and Palin herself choose to ignore the fact that their particular words do not exist in a vacuum. At so many levels, their words have profound influence.

Also, Sharon Angle was not using metaphor when suggesting second amendment remedies to those who did not get their way in the election. Palin fully supported her, and presumably her suggestions.

Loughner, even if mentally ill, is part of a culture and a political climate. We are all influenced by the rhetoric around us.

It is disingenuous, at best, for Palin to suggest a rationalist approach to her words and images, whilst using image and metaphor to rouse negative emotions, if not actions.

I think you are exactly right about Palin's motives - whatever her goals, they all end at the bank.

Thanks for your comment, Chris. I've had problems with my back; and it's made it difficult to sit at a computer keyboard.

I'm on the mend, though. I look forward to your insights. Those of us who've taught writing for a living know what Sarah is up to.