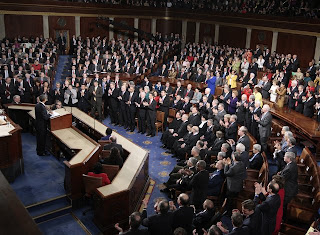 As Barack Obama used the phrase last night, it was no boast. It was a a simple statement of fact. From Abraham Lincoln`s establishment of the land grant colleges, to Franklin Roosevelt`s electrification of America through projects like of the TVA, to Dwight Eisenhower`s construction of the Interstate Highway System, to John Kennedy`s commitment to land on the moon -- what Obama said was no opinion. It was a statement of fact.

Obama also wants to do big things because, as he put it, ``this is our generation`s Sputnik moment.`` It will not be easy. As Micheal Gerson reminded his readers this morning: ``Paul Ryan and many Republicans believe that America has entered a fiscal emergency that requires a fundamental reconsideration of the role of government.`` For Republicans, this is not a new idea.

Obama did not argue for the status quo. Indeed, as his example of the government`s responsibility for salmon illustrated, there is a great deal of wasteful duplication. But he also did not argue -- as Ronald Reagan did -- that government is the problem. As Gerson also observed, he was ``unapologetic about the need for government activism.``

And so the battle has been joined. And make no mistake. It will be a battle. At some point, Obama will be faced with the political equivalent of pulling a rabbit out of a hat. But last night the president asked Americans to tap their imaginations -- to think big. Because before Americans can do big things, they have to dream big things. May he and his fellow citizens succeed.

This entry is cross posted at The Moderate Voice.
Posted by Owen Gray at 9:28 am

Email ThisBlogThis!Share to TwitterShare to FacebookShare to Pinterest
Labels: State of the Union