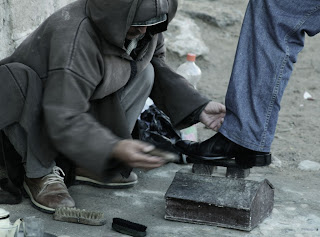 Over the weekend, Stephen Harper delivered a speech in which he congratulated himself and his party for five excellent years. He claimed that he and his Conservatives were merely humble public servants. "We are not in Ottawa for what we are owed and what we think we can get." he trumpeted. "If anybody is, they are in the wrong party. For Conservatives it is about public service and public service means private sacrifice."

Wealth, too, is concentrating. Less than four percent of Canadian households now control more than 65 percent of our net wealth, excluding real estate. That's up from 61 percent five years ago.

So when Mr. Harper tells us that Canadians are doing better, the question is, which ones?

There has always been a huge gap between what Mr. Harper says and what he does. Back in 1991, he ended his Master's Thesis is Economics with the following conclusion: "The record indicates that particularly activist Keynesian policy has been rare in the post war period. The results indicate that it should remain so." This, from the man who has applied that biggest Keynesian stimulus since The Great Depression.

So, what do the results indicate? They indicate that Mr. Harper will do whatever it takes to survive. When other politicians take that course, he calls them hypocrites. Or he questions their patriotism. His most recent ads questioning Mr.Ignatieff''s patriotism are a case in point.

The question is simply this: "When the Prime Minister opens his mouth, can you believe him?" I suggest the answer is "No." Our humble public servant is neither humble nor honest.
Posted by Owen Gray at 8:07 am