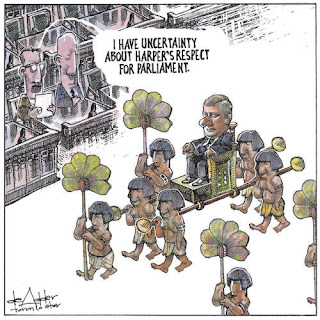 In a recent column in The New York Times, Paul Krugman wrote about the chasm which exists between the two major parties in the United States:

One side of American politics considers the modern welfare state -- a private enterprise economy but one in which society's winners are taxed to pay for a social safety net -- morally superior to the capitalism, red in tooth and claw, we had before the New Deal. It's only right, this side believes, for the affluent to help the less fortunate.

The other side believes that people have a right to keep what they earn, and that taxing them to support others, no matter how needy, amounts to theft.

Historically, the Liberal Party of Canada has stood for the first option. It was a notion which the old Progressive Conservative Party also stood for. The rise of Stephen Harper's Conservatives represents the ascendancy of the second option -- which is why the late Dalton Camp spent his final years warning his readers of the dangers of what he correctly diagnosed as a faux Conservatism.

There have been other Cassandras. In yesterday's Toronto Star, James Travers writes that the Prime Minister has changed the country "more than we realize." Harper has done this by effectively operating below the radar, by shutting down Parliament, by capitalizing on the Liberals' disarray, and by smearing his opponents:

The opposition needs to begin its defence with an attack on the Conservatives' so called "principled values." Once again, the Harperites have begun to beat the "separatist coalition" drum. But, in September, 2004 -- when the future of the Martin government hung in the balance -- Mr. Harper penned a letter to Adriennne Clarkson, the Governor General. He wrote:

We respectfully point out the the opposition parties, who together constitute a majority in the House, have been in close consultation. We believe that, should a request for dissolution arise, this should give you cause, as constitutional practice has determined, to consult the opposition leaders and consider all your options before exercising your constitutional authority.

That principle has disappeared into the aether. So has the principle of government accountability and the commitment to balanced budgets. This Prime Minister will -- to mangle John Kennedy -- avoid any price and abandon any burden to get elected. The only time the opposition parties stopped him dead in his tracks was three years ago when they threatened to form a coalition.

Harper only respects his opponents when they can do him real harm. Otherwise, he rules --as Susan Diebel has noted -- through fear and loathing. Given what is at stake, it is imperative that the Liberals, the NDP and the Bloc Quebecois think carefully about how to deal with Mr. Harper. He is focused on his objective. And he will stop at nothing -- short of an effective coalition -- to obtain it.
Posted by Owen Gray at 8:22 am

I am sickened. I am frustrated. I am scared. I am ashamed to be a Canadian these days...and it is all because of Harper and his rule.

Heaven help us all!

And what is, indeed, frustrating -- if the polls are to be believed -- is that your opinion is the majority opinion.

Mr. Harper has governed as if he had majority opinion on his side. Unless the opposition parties can find a way to credibly represent the majority of Canadians, we will have to live with this Prime Minister for quite awhile.

That thought really does make one feel ashamed.