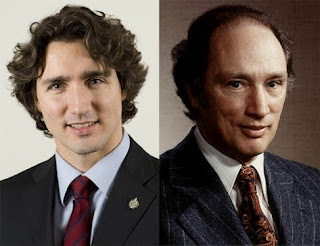 I cannot imagine that, these days, Pierre would applaud Justin's performance. Trudeau the Elder famously said that living next to the United States was like sleeping with an elephant. But I doubt that he would counsel his son to navigate the relationship by climbing on the elephant's back. That, however, is what Justin has been doing lately. He applauded Donald Trump's attack on Syria. Now he is boycotting a key UN disarmament initiative. Linda McQuaid writes:

Having Trump's back may be Trudeau's idea of putting Canada back on the world stage, but it feels more like a revival of the Harper era.

And while the Trudeau team is very worked up about chemical weapons, they seem strangely unconcerned about nuclear ones.


Pierre Trudeau crusaded against nuclear weapons. Back in 1983, he tried to end the Cold War, doing his own shuttle diplomacy between Moscow and Washington. Mr. Trump has signaled that he wants to rebuild his country's nuclear capacity, and he has refused to join the discussions which will include 123 of the 193 members of the UN.  Justin's decision to side with Trump

has prompted condemnation from more than 900 Order of Canada recipients, led by Nobel-laureate John Polanyi and former Canadian Ambassador for Disarmament Douglas Roche, who calls the Trudeau government's stance "astounding" and "a denial of the country's long track record of working constructively for nuclear disarmament."

He is getting it from all sides now. This morning (Hong Kong time) the Guardian had an interesting piece on Justin's dismal stand on all things to do with carbon.

The world is catching up with him, zoombats.

On my blog today, I feature a guest post by Pamela MacNeil, Owen. I think it is safe to say that she also has young Justin's number.

Pam had reservations about Justin from the beginning, Lorne --and they were justified.

Alison at "Creekside" has kept a record of Canada's voting record on Israel at the UN General Assembly. It's as shocking as it is shameful. Time and again Canada joins the United States and a gaggle of small, bought and paid for, island states from the central Pacific to oppose votes on motions in any way critical of Israel or pro-Palestine. Canada, the United States, and these island puppets stand in opposition to the rest of the world including South America, Africa, all of Asia, and, most importantly, every nation of the European Union. We grew resigned to it under Harper but Trudeau has continued Harper's work in lockstep. Slick went out of his way to maintain that he's not his father. I think we can take him at his word and I so hope people in his own party finally get the decency to see him replaced with somebody who is genuinely liberal.

When you get beneath the polish, Mound, what you see someone who follows, not leads.

In one of the articles today Owen titled, "Trudeau Government Hasn't Ruled out Military Role in Syria: Parliamentary Secretary, further validates what you and Linda McQuaid are saying.

I find Trudeau's succumbing to all US dictates frightening. I wonder if what he really wants is for Canada to literally join the US? His policies and foreign policy decisions seem to be going in that direction.

There's all kinds of evidence, Pam, that those who do business with Trump get taken to the cleaners. Justin should no better than to co-operate with a man who can't be trusted.

maybe there is no chance at succes. I know I have moved like the greenland icefield.
we have Gay rights
we recognize the enviorment is not under human control
otherwise
still the same old mediviel fight for rights to do what you want

Things seem to be static, Steve. In the end, not much changes.

There is room for two states there, Steve. But getting to two states isn't easy.

PET with the CHarter of rights and with all the people with funny hats made today Canada.
Its not perfect, but damm good

Unfortunately. there are lots of forces trying to undermine that Canada, Steve.

"And I've been reading about it. And I've been talking about it for a long time. And that demands really immediately fair trade with all of our trading partners. AND THAT INCLUDES CANADA. Because in Canada some very unfair things have happened to our dairy farmers, and others. And we're going to start working on that with Ron and with Scott, and with Paul, and with all of your representatives.

Imagine the fun to be had in trying to make a deal with that mumbo-jumbo. Maybe Scott and Trump can put their huge brains together and figure out how all this cheese fits into both of their big pictures.

"Immigrants account for more than 40% of the hired help on dairy farms, according to a University of Wisconsin study. Without immigrants, mostly from Mexico, some farmers say they would be forced to quit milking cows because there aren't enough other people willing to do the work.

"You could not operate a large dairy farm today without immigrants, said Jason Vorpahl, owner of Rockland Dairy in Random Lake. ...

"According to a UW study, nearly 90% of Wisconsin's immigrant dairy workers are from Mexico. Some of them have come here from other states, such as Arizona, that have passed laws cracking down on undocumented workers."

I'll bet Trump can hardly wait to peruse the grousing of the next whining regional special interest. His "Economic Nationalist" team seems to be suffering from a few severe cases of cross-eyed tunnel vision.

Okay. Blame Canada's pinko supply management system. When the time comes, and according to Trump the time is now, let's see whether Justin can take any lessons from the reality of libertarian hypocrisy and sort this one out. Maybe a few too many dots for the boy to try and connect all at once.