Oblivious To It All 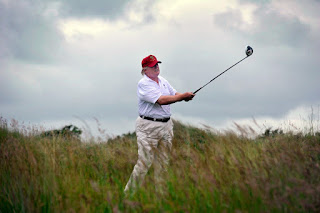 A conservative watchdog group, Judicial Watch, estimated that Obama cost taxpayers $97 million in leisure travel costs during his two terms. But Obama now looks like a relative cheapskate, while it is Trump who seems unable to break the habit.


Trump opined that Obama spent way too much time on the golf course. But, as with everything else about Trump, the hypocrisy is stunning:

Trump vowed last year that when he became president, he would be working so hard that “I’m not going to have time to go play golf.” That turns out to have been wrong. A more accurate prediction would have been, “I'm going to play golf all the time.”


Trump has found time to play golf 14 times since his inauguration. At this point in his presidency, Obama hadn’t yet taken up the game; when he did, one of his most vocal critics was one Donald Trump, who complained that a president should have more important things to do. Maybe now Trump has figured out how to Make America Great Again with a pitching wedge.

Robinson acknowledges that some might accuse him of being petty. But he then goes on to put Trump's hypocrisy in context:

Trump’s love of leisure is yet another example of the gaping chasm between the kind of president he claimed he would be and the kind he actually is. Trump portrayed himself as a man of the people, not in any literal sense — he also portrayed himself as worth $10 billion, you will recall — but in the cultural sense. He was used to wearing a hard hat. He could safely navigate a construction site. He knew the value of an honest day’s work. He was Joe Sixpack, if Joe Sixpack didn’t drink and had a supermodel wife.

Trump also promised a set of populist policies designed to help the working class. Instead, he has tried to deliver an orthodox Republican agenda that offers tons of goodies for the wealthy and nothing but lumps of coal for everyone else. His first attempt to pass major legislation would have taken health insurance away from 24 million people.

His foreign policy has been incoherent. His immigration policy has been mean-spirited and unserious. His fiscal policy seeks to punish the poor. His top aides spend much of their time stabbing one another in the back.

And Trump is oblivious to it all.

Image: Agence France-Presse
Posted by Owen Gray at 8:14 am

Just another example of something I've long observed - when conservatives slam the opposition, it's usually projection. See e.g. Rona Ambrose criticizing Justin Trudeau's vacay from on board a billionaire's yacht. As they say, whenever you point your finger, there are three fingers pointing back.

It's about throwing stones when you live in a glass house, Cap.