Is The BBC Normailizing Roger Stone? 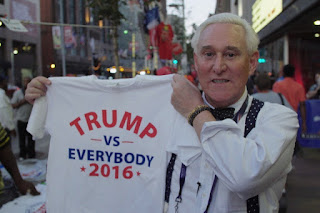 There has been a concerted effort in the United States to normalize Donald Trump. But Jonathan Freedland wonders if that effort is moving beyond that country's shores. He points to a recent interview BBC personality John Humphrys did with Roger Stone, one of Donald Trump's close associates and Paul Manafort's business partner. Freedland writes that Humphrys made no attempt to offer background on Stone:

Stone was suspended from Twitter last October after a litany of racist and abusive tweets directed at reporters. He was banned from CNN and MSNBC in 2016 (though he’s still welcome on Fox). Stone tweeted that CNN pundit Roland Martin was a “stupid negro” and a “fat negro”. To Jill Abramson, former editor of the New York Times and now a Guardian contributor, he tweeted in caps: “DIE BITCH!” He called the columnist Gail Collins an “elitist cunt”. In 2015, Stone dedicated a book on the Clintons he had co-written to one Victor Thorn, the author of “The Holocaust Hoax Exposed”, who blames 9/11 on a “Jewish plot”.


Stone is a nasty piece of work, which is readily apparent in the documentary, Get Me Roger Stone.. Humphrys, however, did not challenge Stone about his past work and statements. In the aftermath of Trump's State of the Union:

To Stone he was gentleness itself. First came the teleprompter delusion. “Is he a new Donald Trump?” Humphrey's asked, marvelling that the “tone was so different” on Tuesday night. Stone was allowed to muse, uninterrupted, that Trump had “learned how to make the microphone come to him”, and that his tone was indeed warmer. “And less bellicose,” agreed Humphreys

There followed a brief discussion about what Stone called the “Russian collusion delusion” – but, incredibly, no mention of Stone’s involvement in that affair. You’d not have known that Stone was one of several in Trump’s circle to have come under FBI investigation for alleged contacts with Russian officials, or that he was threatened last autumn with a subpoena by a congressional intelligence committee over his contacts with Julian Assange and WikiLeaks (Stone had an uncanny knack of predicting when WikiLeaks would drop damaging information about Hillary Clinton and her campaign). US investigators have also probed Stone’s contacts during the 2016 campaign with the Russian hacker Guccifer 2.0, widely thought to be behind the spreading of emails stolen from the Democratic party.


Democracy in the United States is in deep trouble because many Americans are trying to normalize Donald Trump. If other countries try to nomalize him, or his associates, the virus could become a world wide pandemic.

Absolutely, Mound. The virus is everywhere.