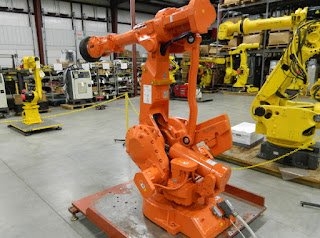 Goblaization caused massive dislocation around the world. And, as robots take over the workplace, that dislocation will continue. Larry Elliott writes:

In some ways, the debate that was taking place between the tech industry, politicians and academics in Davos last week was similar to that which surrounded globalisation in the early 1990s. Back then, it was accepted that free movement of goods, people and money around the world would create losers as well as winners, but provided the losers were adequately compensated – either through reskilling, better education, or a stronger social safety net – all would be well.

But the reskilling never happened. Governments did not increase their budgets for education, and in some cases cut them. Welfare safety nets were made less generous. Communities affected by deindustrialisation never really recovered. Writing in the recent McKinsey quarterly, W Brian Arthur put it this way: “Offshoring in the last few decades has eaten up physical jobs and whole industries, jobs that were not replaced. The current transfer of jobs from the physical to the virtual economy is a different sort of offshoring, not to a foreign country but to a virtual one. If we follow recent history we can’t assume these jobs will be replaced either.”


The Neo-Liberal Revolution insured that nothing would be done for those who lost their jobs. And, because the  neo-liberal virus has not died, it looks like the Robotic Revolution will only make things worse for displaced workers. However, some of the wiser heads on the planet are suggesting remedies:

As the Institute for Public Policy Research has noted, new models of ownership are needed to ensure that the dividends of automation are broadly shared. One of its suggestions is a citizens’ wealth fund that would own a broad portfolio of assets on behalf of the public and would pay out a universal capital dividend. This could be financed either from the proceeds of asset sales or by companies paying corporation tax in the form of shares that would become more valuable due to the higher profits generated by automation.

The dislocation will be considerable, and comes at a time when social fabrics are already frayed. To ensure that, as in the past, technological change leads to a net increase in jobs, the benefits will have to be spread around and the concept of what constitutes work rethought. That’s why one of the hardest working academics in Davos last week was Guy Standing of Soas University of London, who was on panel after panel making the case for a universal basic income, an idea that has its critics on both left and right, but whose time may well have come.

Email ThisBlogThis!Share to TwitterShare to FacebookShare to Pinterest
Labels: The Robotic Revolution

I have been watching a series of documentaries on Netflix entitled "Dirty Money," Owen. I highly recommend it, as it offers a confirmation of what we already know about those behind the corporate agenda: they are devoid of any sense of responsibility to their fellow human beings. Whether it is Volkswagen perpetrating a worldwide fraud on emission controls or pharmaceuticals unconscionably raising drug prices into the stratosphere, it is clear that they care only about profit no matter the cost to the rest of us. Therefore, the suggestion for spreading the wealth in your post is, in my mind, a horse that will not run.

I understand your cynicsm, Lorne. The movers and shakers may ot may not have read Ayn Rand. But they fervently believe she was right when she declared that selfishness is a virtue.


The train is barreling toward the washed out bridge and there's no one manning the locomotive. Our leaders do not talk about these things and that's a deliberate omission. If they posed these issues to us we might ask "Well why then are you doing nothing about it? What are you consigning our kids to this fate? Why are you pursuing policies that will probably make this much worse than necessary? Why should we tolerate this awful form of government?"

Can you imagine Trudeau having to endure that at one of his town halls?

Sargeant Schultz is in command, Mound, and he "sees nothing at all."