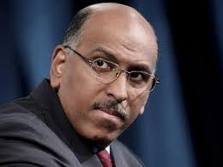 As President Obama's approval numbers tanked again last week, Michael Steele donned a red hat, emblazoned with the logo "Fire Pelosi," and kicked off a six week bus tour. He was jubilant as he spoke to a crowd in Kansas City, predicting that he and the RNC would send Pelosi to "the back of the bus."

One could be forgiven for thinking that one's hearing was faulty. But a few weeks ago -- speaking about the war in Afghanistan -- Steele said, "This war was of Obama's choosing. This is not something the United States has actively prosecuted or wanted to engage in."

And shortly after assuming the chairmanship of the Republican National Committee, Steele claimed that Obama's election was a fluke: "The problem we have with this president," he said, "is we don't know him. He was not vetted, folks. . . . He was not vetted because the press fell in love with the black man running for office." The longest primary season in American political history somehow did not register with Mr. Steele.

Alot of history has not registered with Mr. Steele. On the subject of the stimulus package, he said, " Not in the history of mankind has the government ever created a job." He was, of course, conveniently forgetting that he used to be the Lt. Governor of Maryland.

His gaffes have not gone unnoticed. William Kristol has suggested that he should be guided to the door marked Exit. Steele, however, has an answer for his critics: "I'm very introspective about things. I'm a cause and effect kind of guy. So, if I do something there's a reason for it. . . It may look like a mistake, a gaffe. There is a rationale, there is a logic behind it."

Mr. Steele's logic increasingly eludes even members of his own party. Perhaps that's because he has -- in the now famous words of one of George W. Bush's advisers -- left "the reality based community." There was a time when those who checked out of that community resided in the Twilight Zone.

This entry is cross posted at The Moderate Voice.
Posted by Owen Gray at 1:50 pm

As a "cause and effect kind of guy," he won't be surprised by karma - which may come sooner rather than later.

Let's hope there is some kind of cosmic justice at work, Chris.

Too many people fought too hard to move from the back of the bus to any seat they chose.

I can't help but think what Martin Luther King would say. He certainly would have said something about injustice in that organ roll cadence which commanded your attention.

I agree with you both.

if "Karma" is real, I have a sneaking suspicion that Michael Steele is being inflicted upon those--like myself--who have spent far too long "at the front of the bus" as a matter of course.

I am sure that we all take our good fortune for granted.

If Michael Steele serves any purpose at all, perhaps it is to remind us that even the best of intentions can be twisted by self interest -- and the desire to survive at any cost.

Mister Steele's "gaffe" is one of the many convenient revisions of history to have been unearthed and reported by the American mass media, notably by CNN, in the past several months.

The wide exposure of such obvious lies is overdue. It's a small part of what could be the beginning of a re-education of the American public, a need which President Obama emphasized at the start of his presidency.

These opportunistic fabrications of history not only play to the ignorance of Americans, but reveal a deep disdain for them as a competent electorate.

The number of transparent lies told by Republicans -- a practice the present government of Canada has emulated -- is remarkable.

Once voters know they have been played for fools, their anger knows no bounds. After the sobriquet, "Lyin' Brian" was hung around Mr. Mulroney's neck, he was part of Canadian history.

It's good to have you back in the debate.