The Trials of Jeremiah 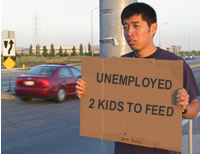 There must have been times over the last couple of years when Bob Herbert felt like Jeremiah -- warning that a reckoning was on the way, and being ignored by those who might be able to avoid it. His frustration was evident in Saturday's New York Times:

The country is a mess. The economy is horrendous, and millions of American families are running out of ammunition in their fight against destitution. Steadily increasing numbers of middle class families, who never thought they'd be seeking charity, have been showing up at food pantries.

Throughout the battle for health care reform and the battle for Wall Street reform, Herbert has written that the government's first priority should be job creation. While it is true -- as Peter Orzag stoutly maintained -- that the best way to control ballooning deficits is to control health care costs, it is also true that, for average Americans, the best way to pay the bills is to be employed.

Herbert is in good company. Like Paul Krugman and Robert Reich, he believes that without government supported employment, the economy will not recover:

The problem with the U.S. economy today, as it was during the Great Depression, is the absence of sufficient demand for goods and services. Consumers, struggling with sky high unemployment and staggering debt loads, are tapped out. The economy cannot be made healthy again, and there is no chance of doing anything substantial about budget deficits, as long as so many millions of people are left with essentially no purchasing power. Jobs are the only real answer.

And there is plenty of work to do. Like the TVA and the Interstate Highway System -- two pertinent examples -- investments must be made in America's infrastructure, to ensure the nation's economic viability in the 21st Century. Those investments will require a staggering amount of money -- a thought which sends modern Republicans into apoplexy. But Herbert correctly quotes Franklin Roosevelt, "You cannot borrow your way out of debt, but you can invest your way into a sounder future."

Roosevelt's proposition will be tested in November. If one believes the polls, that proposition may go down to defeat. However, the very Republicans whose poll numbers have them dreaming of a return to power, may be President Obama's salvation. As Eugene Robinson reminded readers of The Washington Post and The Moderate Voice last week:

Democrats may be facing a tough fight this fall, but Republicans are giving them plenty of material to work with. In several high-profile contests, candidates who won nominations with fervent tea party support appear to be in the process of snatching defeat from the jaws of victory.

In Colorado, the Republican candidate for governor sees urban cyclists as part of a United Nations conspiracy. In Nevada, Sharon Angle wants the press to ask her only the questions she chooses to answer. In Connecticut, Linda McMahon, the wife of the man behind the WWE, has been known to enter the ring with other brutish bores and kick men in the crotch. And, in Kentucky, Rand Paul has expressed doubts about the wisdom of the Civil Rights Act.

Herbert's premonition that it's a hard rain's a gonna fall on Democrats may be justified. Certainly, he would say, they should have seen it coming. On the other hand, with candidates like Angle, McMahon and Paul, the tide may run the other way.

As a Canadian who visits his son's family in the USA every year, who has for years watched both CNN and FOX TV news, reads various American papers on line, and who should therefore have some notion about who will win what in their country's next election, I must admit that I haven't a clue. The more I see and hear of Americans, the less I understand who they are.

How, for example, could any of the following things be a possible reason for losing an election in a democracy supposedly dedicated to the equality and happiness of all its citizens: providing the destitute with health care; stressing the importance of freedom of religion; curbing the risky practices of a banking system which sacrifices the many to the interests of the few; addressing the abuses of racism?

How could any of the following be an election winner: allowing as a fundamental right a country's populace to go about as highly armed as any of the bandits in any of the most lawless countries on Earth; in the interests of national pride, pursuing questionable and expensive wars which waste both people and material resources;in a time of financial need, cutting the taxes of only the wealthiest citizens; allowing, possibly encouraging the unfettered use of fossil fuels to the detriment of the entire world?

Americans often seem denizens of a different planet than the one which we Canadians and the rest of the civilized world inhabit.

For the sake of that civilized world, I hope Americans cast their ballots in a way which the rest of us would approve. If they do vote that way, chances are they will have voted wisely.

I feel so strongly about this matter, that I would like to advise Americans to vote as I just implied. But as any blockhead might guess, not only would they not vote wisely, but (if I understand anything about them), they'd do the "American thing" and declare war, and so I'll just keep quiet about it.

I share your confusion about what is happening in the United States.

The furor over the mosque in New York reminds me of the heyday of the "know nothings" -- the 1850's -- when popular opinion held that allowing Catholic immigrants into the country was the equivalent of Benedict Arnold surrendering to the Vatican.

On the subject of the economic solutions proposed by the deficit hawks -- who, by the way, are alive and well in Ottawa -- all I can do is repeat George Santayana's well worn warning: those who do not learn from history are doomed to repeat it.

"Americans often seem denizens of a different planet than the one which we Canadians and the rest of the civilized world inhabit."

I think that the issue is that two sizable and perhaps nearly equal chunks of the American populace inhabit very different worlds. One portion--the portion who helped put Obama in office--lives more or less in the world we inhabit. The other... lives in a world in which the end times are at hand, the planet earth is 6000 years old, and a non-American-citizen-Kenyan-born-fascist-communist-muslim-satanist-antichrist has snuck into the White House to destroy America from within.

I'm increasingly convinced that the problem is less ideological as it is epistemological.

It's enough to make an agnostic-secular-humanist type guy like myself ... pray.

I read today that Sarah Palin is now defending Dr. Laura's use of the N word.

My parents made it clear to me -- at a very young age -- that that word was never to be used by anyone in our family.

Ms. Palin lives on another planet than the one I grew up on.

"Palin lives on another planet than the one I grew up on."

But perhaps she lives on the planet you were born on: the one your parents hoped would have changed by now.