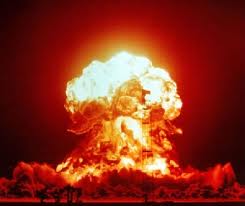 Israel is moving -- inexorably -- towards a confrontation with Iran. As Tom Walkom points out in today's Toronto Star,  the Israelis do not necessarily believe that Iran will unleash a nuclear attack on their country. The result would surely be mutually asssured destruction. But the bomb is Israel's trump card. The Israelis are:

terrified that the loss of Israel’s nuclear monopoly in the Middle East would weaken its hand in its dealing with other enemies, a weakening that, in the long run, might encourage Jewish citizens to abandon a country that prides itself on being a Jewish state.


However, recent events have also led the Iranians to some rock hard convictions about nuclear weapons:

The 1980 war with Iraq, however, reawakened Iran’s appetite for weapons of deterrence.

By 2001, Iran faced Saddam Hussein’s hostile Iraq on one side and an equally hostile U.S. operating in Afghanistan on the other.

The 2003 U.S. invasion of Iraq eliminated Saddam. But it also demonstrated that countries without nuclear weapons could be easily picked off — which spooked Iran even more.


In short, both nations see nuclear weapons as the guarantors of their existence. In the past, Canada wisely stayed out of such conflicts, believing that discretion was the better part of valor:

We sat out the brief 1956 Suez war that pitted Britain, France and Israel against Egypt. We avoided involvement in America’s bruising Vietnam War and explicitly rejected Washington’s entreaties to join its 2003 invasion of Iraq.

We went into Afghanistan only after the United States invoked a clause in the NATO treaty that obligated us to do so.


But that was then. Stephen Harper's foreign policy does not depend on discretion. He believed that Canada should have joined in the invasion of Iraq. And his support for Israel is unconditional.

Walkom puts the choice quite succinctly:

Is it better to let Iran follow in the footsteps of the U.S., France, Britain, Russia, China, India, Pakistan, Israel and North Korea by acquiring nuclear weapons?

Or is better to unleash another Mideast war?


For Canadians the question is, which choice would Stephen Harper make?

Email ThisBlogThis!Share to TwitterShare to FacebookShare to Pinterest
Labels: Israel and Iran

I doubt Washington would tolerate an Israeli strike on Iran. The aftermath would collapse the global economy. Iran has a powerful anti-shipping missile system that is believed more than capable enough to shut down all tanker traffic through the Persian Gulf. It would take a major air war to take out Iran's nuke installations and their military systems. Iran also has pretty modern air defence systems so it would be bound to turn messy for everyone.

The question is, does Washington have the tools to shut down an Israeli attack?

Regardless, Mound, the notion that such an operation would be relatively painless is insane.

No it certainly wouldn't be painless, especially for the US. Then there is the Shiite population in the Sunni-dominated Gulf States and in Iraq. An attack on Iran, by Israel or the US, could coalesce the Shia and destabilize their tense peace with the Sunni. I think that's why the Saudis are trying to avert an attack.

The US has done so much to solidify Iran's influence over its region, particularly Iraq, and this would probably be the icing on the cake for the Mullahs. Even Iran's resistance parties have warned they'll fall in line behind the Tehran government if outsiders attack.

The Likud government in Israel is fixing for a fight with Iran. They are a suicidal lot I am afraid. They have not given the US assurances that they would get a heads up before they attacked Iran.
The US is now watching Israels actions carefully. Obama has been shown so much contempt by the Israeli government that you can be sure he has no control over them.

Let us pray, "The tail does not wag the dog."

There is not such thing as a limited attack on Iran. They have the means to reply and they will.
The US CANNOT AFFORD ANOTHER WAR.
Their 'friend and ally" Israel will drag them into one in their defense (Canada will join in.) American assests in the middle east will become targets from Shia Muslim governments at least. Russia and China will support Iran.
Europe Union will be split on NATO's involvement.

Iran is three times larger than Iraq and has a much better military. Iran can tie up the Persian gulf which would double or triple the cost of oil. The US would need to draft soldiers again in order to launch a land war on Iran as they would need at least 1,000,000 soldiers on the ground.

Israel is the bigggest danger in the Middle East and needs to be stopped from triggering a war which could be another World War.
The economy of the World and the US cannot afford such an insane attack on Iran,which actually does not have a nuclear weapon, repeately denies wanting one and the most powerful Islamic leader has always said such a weapon is un Islamic.

It is hard to understand why Israel would be so foolish. A former head of Mossad says it is a crazy idea. What is worrying is that the military leadership in Israel, who resists such adventures has been replaced by younger personal that the Likud government may have more sway over.

All of this is deeply troubling, Philip, which underscores the need for discretion -- something which Mr. Harper lacks.

I'm always amazed at how easily people forget the lessons behind Barbara Tuchman's book, The Guns of August, Mound.

Going to war always has unintended consequences -- and it weaves a web of international folly. Stephen Harper claims he is an economist -- not a credible claim -- but he's certainly no historian.

Philip may well be right. Netanyahu has destabilized Israel and religious fundamentalists have risen to command positions in their army (as many have in the US Army.

Could Iran be the 21st century's Sarajevo of June, 1914? An Israeli attack could be precipitous of a larger conflict. The Shanghai Cooperation Organization has already granted a form of probationary status to Pakistan and India. Imagine if the SCO brought Iran under its umbrella. That establishes a virtually automatic Cold War only in a region already primed and volatile.

An Israeli attack would gut what remains of America's waning influence in the Middle East. There is a power vacuum emerging and new economic powers, particularly China, eager to fill it. Israel would be seen as a proxy for the US and three American wars against Muslim states in just over a decade would be intolerable.

The whole business is madness. You can't attack Iran's nuclear facilities without simultaneously taking out its coastal anti-shipping missile batteries. Fail to do both and you instantly sever tanker traffic through the Persian Gulf. However Iran's anti-shipping batteries are defended by pretty effective Russian anti-aircraft missile batteries, possibly even the ultra-lethal S-300s although Russia still denies actually having delivered them.

Canada won't get involved. There'll be no role suitable to our forces. All F-18s can do in Iran is get shot down in short order.

I hope that your prediction about Canada not getting involved is correct, Mound.

What bothers me is that Stephen Harper has been beating the drum against Iran for a long time. And he is less than temperate when dealing with those who don't share his world view.

I suppose if Lockheed had delivered those F-35s Harper would indeed be itching to use them. Fortunately if the aircraft actually goes into production, and I hope not, we won't have our stealth bomb trucks in service until 2018 to 2020.

There is,indeed, a ray of hope in the F35 debacle. If Leon Panetta cancels the plane, there will be even more hope.