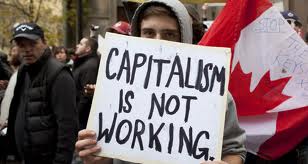 Things are moving in the right direction. Despite the evictions of protesters from public spaces across Canada, Linda McQuaig writes that the Occupy Movement has managed to "change the public discourse, putting inequality front and centre — something activists and writers, myself included, have failed to accomplish despite decades of trying."

Even members of the elite are switching sides. Last week a retired Philadelphia police chief was arrested "at a New York protest where he told the cops they were just 'workers for the 1 per cent.'” And former prime minister Paul Martin -- who slashed social spending when he was finance minister two decades ago -- has come on board:

The fact is (the Occupiers) have touched a chord with Canadians and, I’m sure, with Americans,” said Martin. “Look, there’s something fundamentally wrong here . . . For the last hundred years, certainly in North America, every generation has felt it’s going to have a better life than their parents. For the first time, that’s not there.”


It's a little late for Martin to come to the table. But, like the retired police chief, he's there. Their presence does not mean that the battle has been won. As Murray Dobbin warned his readers last week, the people who make the decisions in Ottawa, Washington, New York and Toronto are still in charge:

Those decisions involve power and as the occupiers are discovering anew, that power is entrenched, protected and ruthless, and it will not be denied easily what it has accumulated over the decades.


Like Franklin Roosevelt, Martin and the police chief will be called traitors to their class. But McQuaig writes that the Occupiers deserve our admiration:

Wow. After only two months, the Occupy movement — without backing from billionaires or governments — seems to have moved us into a new era. Not bad for a leaderless group that sleeps in tents and doesn’t even use microphones.


This is a dark time. But it is not a time without hope.