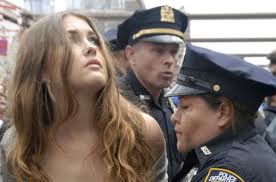 The reaction is starting to set in. The Occupy Protesters have been evicted from their camps in London and Halifax. Mayor Rob Ford has told the people in St. James Park it's time to go. John Gardiner, who calls himself "an old hippie," writes that the civic officials who are evicting the protesters don't get it:


They are the powers that be. Back in the 1960's, they were called "The Establishment:"

Back in the 1960s, the Establishment was just getting its footing, just starting to entrench itself in our societies. Today, it’s everything and everywhere.

It’s what sets the price of oil. It’s what starts wars where poor people fight it out. It’s what causes big banks to collapse so the little people can pick up the pieces. It’s so powerful that governments bow to it and bail it out when it gets itself into trouble. It’s the Establishment, plain and simple.

Its members are people who can see the future and who want to change it. Just like the hippies, who were like the canary in the coal mine. When they died – and die they did – we should have seen the so-called writing on the wall. We should have known there was poison in the air. But we didn’t get it. And the results are all around us.


There were those -- the Establishment -- who called the hippies naive. There were hippies -- like Jerry Rubin -- who went to Wall Street and became part of the Establishment. And, most of us -- because we had to pay the bills -- accepted that the world had always been a cruel and unforgiving place.

And, in the meantime, the world became more cruel and more unforgiving. Gardiner, I'm afraid, has got it right:

I’m convinced that a thousand years into the future – if we can stagger that far forward – our current era will be known only for its barbarism, both economic and physical. It’s a time of great darkness, regardless of the apparent gains in technology.


Like the hippies of another time, the Occupy Protesters are simply trying to make the world a better place. They get it.
Posted by Owen Gray at 8:17 am

Don't forget that besides being a lazy son of privilege, Ford is also incredibly stupid.

He thinks there are things worth fighting against too: bike lanes and non-existent gravy trains.

Most all the critics of the Occupy movement betray either stupidity, ignorance, or fraud.

Ford's rise has been all about getting even. Like Stephen Harper, his energy comes from a need for vengeance.

And the good voters of Toronto and Canada enabled both men.